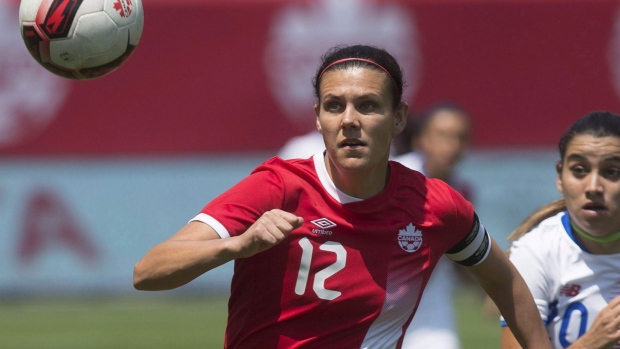 GRENOBLE, France — Captain Christine Sinclair expects to face a desperate side Saturday when fifth-ranked Canada takes on No. 19 New Zealand in the Women's World Cup at the Stade des Alpes.

The Football Ferns, coming off a painful stoppage-time loss to the eighth-ranked Dutch, have not registered a win in five World Cups but have proved a difficult out of late.

They came close to changing their fortunes in their tournament opener. Olivia Chance hit the crossbar for the Kiwis in the 11th minute before Dutch substitute Jill Roord delivered the coup de grace in the 92nd minute in a 1-0 win for the Netherlands.

"I think they're a team that's going to be fighting for their World Cup lives," said Sinclair, who has scored seven of her 182 career goals against New Zealand. "They've never won a game at the World Cup and we know that they're out to try and get a win ... and get out of the group.

"They've obviously improved a lot over the last couple of the years. It's going to be battle."

The Canadian women, who beat No. 46 Cameroon 1-0 in their opener, seem anything but worried about going to battle. Canada Soccer tweeted a video Thursday of the team rocking — and singing — on their bus to Shania Twain's "Man! I Feel Like a Woman!" with goalkeepers Stephanie Labbe, Kailen Sheridan and Sabrina D'Angelo taking turns strutting their stuff in the aisle.

The video was noticed by Twain, who tweeted "LET’S GO GIRLS!!" with a 'hands raised in celebration' emoji to her 912,000 followers.

Still, the Canadian coaching staff is leaving nothing for chance. For the second day in a row, reporters spent the closed portion of training in a locker-room at the back of the stadium because the room originally allocated to the media had windows overlooking the field.

Away from prying eyes, the Canadians worked on their strategy in glorious sunshine at Stade Paul Bourgeat in the shadow of the Alps.

Canada has lost just once to New Zealand in 11 meetings (6-1-4) — with the lone defeat 32 years ago. Their last encounter, at the 2015 World Cup, was a tense affair — partly because then-Canadian coach John Herdman was facing his old team.

New Zealand missed a penalty in a 0-0 draw with Canada at Edmonton's Commonwealth Stadium in a preliminary-round game that featured a 30-minute first-half stoppage due to concerns about lightning.

Amber Hearn hammered the spot kick off the woodwork with defender Allysha Chapman, who conceded what she thought was a soft penalty, famously saying later: "Karma rang the crossbar."

Canada had its chances. A Melissa Tancredi goal was ruled offside and New Zealand 'keeper Erin Nayler made a fine diving save to parry a Sinclair shot off the crossbar. A Sophie Schmidt free kick also hit the woodwork and Nayler made another highlight-reel stop to deny Tancredi.

Nayler, named player of the match four years ago, will be back in the New Zealand goal Saturday. A former molecular biology student, Nayler has won 66 caps for her country. The only New Zealander currently playing club soccer in France, Nayler is with Bordeaux after a stint with Lyon.

"She definitely makes you earn anything you get by her," Sinclair said.

New Zealand laid down a pre-tournament marker with a 1-0 road win over No. 3 England. But that was followed three days later by a 1-0 loss to No. 33 Wales.

With veteran Tom Sermanni at the helm, the Kiwis have a coach who knows the Canadians. The 64-year-old Scot served as an assistant coach with Canada at the last World Cup.

New Zealand took its lumps at the 2015 tournament, where it finished last in its group at 0-2-1 and failed to reach the knockout round. The Football Ferns had to settle for a 2-2 tie with China after an incorrect penalty call that saw Betsy Hassett called for handball. Replays showed the ball hit her torso and not her arm. But China converted the spot kick.

"These games are all about inches — and making the most of those," Sinclair said of World Cup play.

Canada will likely look to fire more shots at goal after perhaps attempting to be too intricate against Cameroon.

Fullback Ashley Lawrence believes the Canadians have identified some areas where they can attack New Zealand.

"There are some spaces we can exploit in transition," she said. "There are little areas where we can really hurt them. But for us, it's about starting strong. We think once we put one in, it's just going to open up the game for us."

NOTES: Sinclair got cake — but not lava cake — for her 36th birthday Wednesday ... The captain says the Canadian team brought maple syrup with them to France for game-day pancake breakfasts ... Former Canadian internationals Robyn Gayle, Rhian Wilkinson and Tancredi are all on staff with the World Cup team.