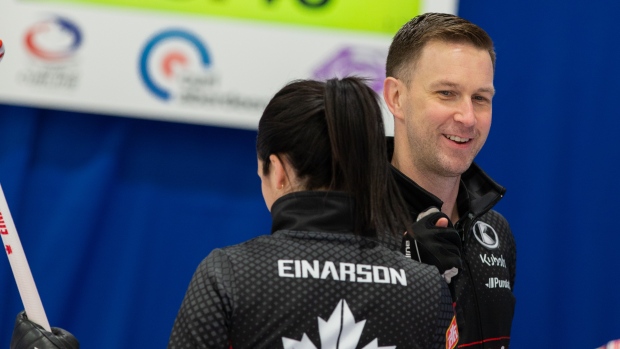 They beat Germany's Pia-Lisa Schoell and Klaudius Harsch 9-6 in the early game before posting a 7-5 win over Hungary's Dorottya Palancsa and Zsolt Kiss at the Curl Aberdeen facility.

Down two without hammer, the Hungarian duo missed a difficult angle-raise with its last shot and Canada didn't have to throw its final stone.

“It was much more of a textbook game and I thought we played really well," Gushue said. "But even though we played it real well, still textbook, it’s still real stressful in the last end of mixed doubles.

"There’s still so much that can happen and there’s no lead that’s really comfortable."

The Canadians (3-0) were tied with Scotland and the Czech Republic atop Group A. Germany was 2-1 while Hungary fell to 1-2.

Norway, Sweden and the United States led the Group B standings at 2-0 entering the late draw.

Canada has another two-game day on tap Wednesday with matchups against Australia (0-3) and South Korea (1-2).

"I think we’re getting better each game and just trying to learn the ice and the paths and figure it out," Einarson said.

This report by The Canadian Press was first published May 18, 2021.