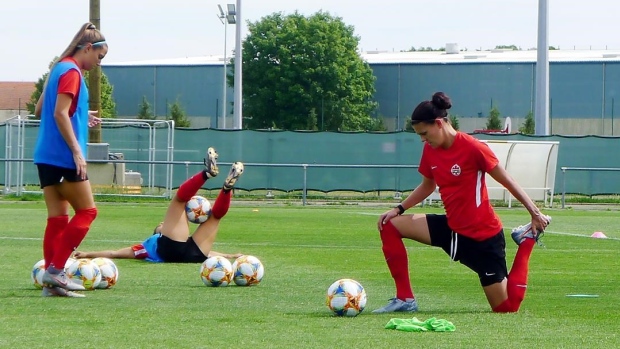 Dutch soccer fans are known for their passion. And with Reims about 400 kilometres away from the southern part of the Netherlands, large sections of Stade Auguste-Delaune will likely be orange.

"They're already talking smack," a smiling Sinclair said of the Dutch. "So it's going to be a great environment. Can't wait."

The Dutch fans who spotted Sinclair on the streets of Reims were not that hostile, however

"They wanted pictures with us," she said. "But we made them take off their orange (gear)."

The fifth-ranked Canadians and eighth-ranked Dutch have already disposed of No. 19 New Zealand and No. 46 Cameroon in group play. While both have already qualified for the round of 16, Thursday will decide their route in the knockout stage.

Sinclair says the Canadians aren't concerned with their tournament road. They just want to keep winning.

The European champion Dutch will be Canada's toughest test to date in France,

"A very talented bunch. Obviously three world-class forwards," said Sinclair. "A step up in level that we haven't experience yet this tournament. It will definitely be a different game than the first two."

Both teams have six points and a goal difference of plus-three. But because the Dutch have scored one more goal, they would finish first in event of a tie. Canada will have to win to top the group.

The Group E winner heads to Rennes to face the Group D runner-up — either No. 3 England or No. 7 Japan, who play Wednesday in Nice. The Group E runner-up travels to Paris to take on the Group F second-place team— either the top-ranked Americans or No. 9 Sweden, who meet Thursday in Le Havre.

Canada tied the Netherlands 1-1 at the 2015 World Cup with substitute Kirsten van de Ven's 87th-minute strike — with a fortuitous bounce triggering the Dutch attack — cancelling out a 10th-minute goal by Ashley Lawrence.

The Dutch ended up losing to eventual runner-up Japan in the round of 16 four years ago. But they have been on an upward trajectory since, winning the European title in 2017 without dropping a game.

The Netherlands ended up having to qualify for this World Cup via the playoff route, after finishing runner-up to Norway in its group despite a 6-1-1 record (a 2-1 loss to Norway in Oslo cost the Dutch). They subsequently dispatched Denmark and Switzerland by identical 4-1 scores to nail down the eighth and last European berth up for grabs.

"Both teams have improved tremendously," said Sinclair, who is four goals away from breaking Abby Wambach's world record of 184 goals. "Obviously I know us a lot better. Just the team we are now compared to four years ago, (we're) leaps and bound ahead of where we were. Just the style of play has completely changed. Those youngsters that were experiencing their first World Cup are now leaders of this team.

"And for Holland, since the last World Cup, they've gone on and won the Euros and (are) pretty much a completely changed as a team ... So we're both on the up."

The Canadians have impressed with the way they have played the ball around at the tournament. Coach Kenneth Heiner-Moller, while pleased at what he's seen, wants more.

"We did very well under limited pressure (in the 2-0 win over New Zealand). We'll have more pressure coming up in the next match and throughout the tournament."

The Canadians trained Thursday at the Stade Jean Boucton outside of Reims, with players reaching for cans of insect repellent after swarms of insects greeted them as they came off the bus.

Canadian-Dutch relations took a hit when a Dutch reporter was escorted out of training. While media were sequestered downstairs in a nearby gym complex during the closed portion of the Canadian practice, the washrooms were upstairs. Apparently the Dutch reporter peeked out a window after the washroom visit.

Reims is the third stop on the Canadian World Cup tour and it has shown the most signs of being a tournament town. Norway played South Korea here Monday night, making for a mix of fans walking the street along with Canadians and Dutch.

The Dutch had a poor Algarve Cup earlier this year losing to Spain and Poland before beating China on penalties to finish 11th. Canada dispatched Sweden in a penalty shootout to finish third at the same tournament.

But the Dutch have won their last five games, outscoring their opposition 16-1.

"They have players in top environments," said Canadian fullback Ashley Lawrence, who plays her club soccer with Paris Saint-Germain. "Offensively they have some threats. We've definitely looked at that. But we're ready to nullify their threats."

Note to readers: This is a corrected story. A previous version incorrectly stated that there is a border between France and the Netherlands.