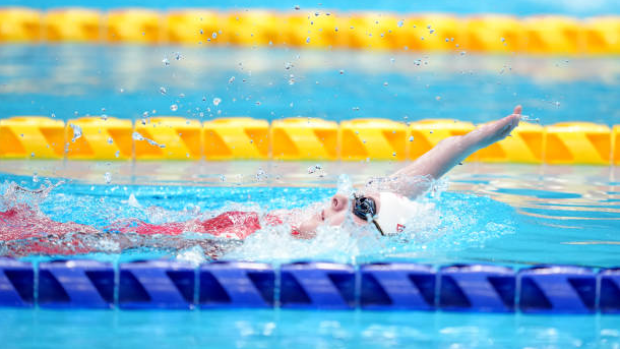 TOKYO — Danielle Dorris couldn't quite believe the silver medal hung around her neck on Monday.

The 18-year-old from Moncton, N.B., captured the hardware with a second-place finish in the women's 100-metre backstroke S7 at the Tokyo Paralympics, but the reality of the situation had yet to sink in.

“It feels very surreal," she said. "I feel like I’m going to wake up from a dream back home in Canada and this will have never happened. But here I am, with a medal. It’s very surreal.”

Dorris touched in a personal-best one minute 21.91 seconds. American Mallory Weggemann took gold and set a new Paralympic record with a time of 1:21.27, and world record holder Julia Gaffney of the U.S. finished third (1:22.02).

Dorris, who was born with only a portion of her arms, said she wanted to use her strength as an advantage throughout the race, particularly on the dive, the underwater portions and the turn.

She got off to a strong start and was well ahead of Weggemann coming out of the turn.

“Being in the only swimmer in that race, really, with good legs, I was able to use that to my advantage, so that was my main goal, not kill my legs on the way back," Dorris said.

After checking the board, the Canadian shared hugs and smiles with teammate Camille Berube, who was swimming in the next lane.

The native of Gatineau, Que., finished fifth in 1:25.04, and said she was getting tired after swimming five races in a week.

“My own race was OK. I was really hoping to be faster. I was aiming for a best time tonight and that didn’t happen," Berube said. "I have one more race (on Tuesday) and then two days off. It’ll be nice to be up in the stands and cheer for my teammates.”

Swimming next to a fellow Canadian was special, Dorris said.

"I think we were able to hype each other up. It was a lot of fun," she said. "I’m very proud of her. It was a really great experience.”

The silver medal is Dorris's first at a Paralympics, coming in her second Games. She became Canada's youngest Paralympic swimmer ever when she made the Rio 2016 team at just 13 years old.

Canada now has 12 medals in Tokyo, including five in swimming (one gold, two silver and two bronze).

The Canadian men's wheelchair basketball team preserved its hope of bringing home some hardware on Monday, advancing to the quarterfinals with a 63-52 win over Colombia.

Head coach Matteo Feriani said his group continues to improve on the defensive side.

Canada finished the preliminary round 2-3 in Group A and will face Britain, the winner of Group B, in the quarterfinals on Wednesday.

On the track Monday, 20-year-old Zachary Gingras of Markham, Ont., qualified for his first Paralympic final in the men's T38 400-metres.

His personal-best time of 51.81 seconds was the third-fastest qualifying time. Gringas will race for a medal on Tuesday.

Brent Lakatos of Dorval, Que., did not qualify for the men's T54 1,500-metre final. The 41-year-old holds the world record in the distance but finished fifth in his heat.

Lakatos has already won a pair of silver medals in Tokyo, finishing second in the 5,000 and 400 races. He is also set to compete in the 100, 800 and the marathon at the Games.

This report by The Canadian Press was first published Aug. 30, 2021.

Note to readers: This is a corrected story. A previous version misspelled Zachary Gingras's last name.