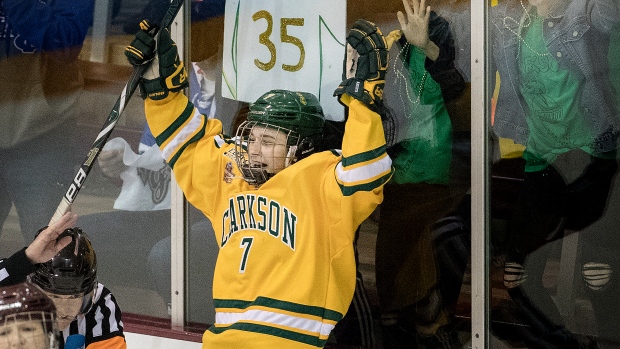 COLORADO SPRINGS, Colo. — Clarkson forward Elizabeth Giguere of Quebec City has been awarded the Patty Kazmaier Award that goes to the top player in NCAA Division I women's hockey.

The award is named in honour of the late Patty Kazmaier, who played for Princeton from 1981 to 1986. She died at age 28 of a blood disease.

Giguere, a junior, led the NCAA in goals scored with 36, including 10 game-winners. She was second in points with 66 points for an average of 1.78 per game to help Clarkson to a 25-6-6 record.

"It would be hard to say that any one player has elevated their game or put their team on their shoulders more than Elizabeth has this year," Clarkson head coach Matt Desrosiers said in a statement.

"We have been fortunate to have had some great players come through our program, but Elizabeth has displayed the ability to do things on the ice that just make you shake your head in amazement. One of the best attributes she has shown is the capability to make everyone around her better."

Clarkson would have opened the NCAA women's championship with a quarterfinal game against Wisconsin on March 14, but the tournament was cancelled because of the COVID-19 pandemic.

The Kazmaier winner was scheduled to be announced in a March 21 ceremony during the Frozen Four tournament in Cambridge, Mass., but that was also cancelled.

"I know we all would have rather been playing in the NCAA tournament this year and attending the ceremony in Boston, but I'm grateful USA Hockey still did their best to make this announcement special," Giguere said in a videotaped address.

"I hope everyone is staying safe and healthy."

Canadians have earned the honour nine times in its 22-year history, including each of the last three years.

Giguere enters her senior year at Clarkson with 210 career points just four points back of the school record held by Gabel.

The award winner and three finalists were chosen by a 13-person selection committee comprised of coaches, media and a USA Hockey representative.

This report by The Canadian Press was first published March 27, 2020.