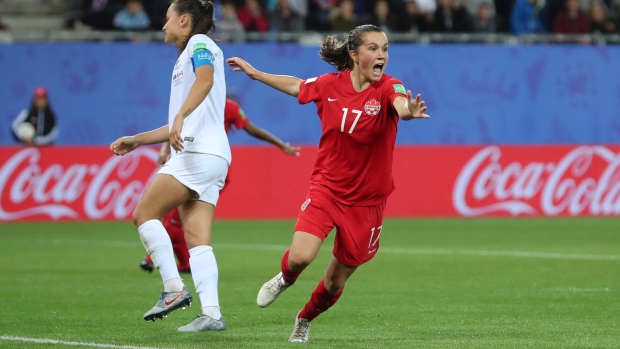 Canadian international Jessie Fleming is one of three finalists for the MAC Hermann Trophy, honouring the top NCAA soccer player.

The 21-year-old UCLA midfielder, a senior from London, Ont., was also a finalist in 2017 when the award went to Stanford's Andi Sullivan.

The finalists were based on voting by NCAA Division I women's soccer coaches.

Fleming is a four-time first team All-Pac-12 honoree and a veteran of two World Cups with Canada, for whom she has won 70 caps.

Fox was a first team All-ACC selection for the second straight season and is a three-time all-conference member in her career. Macario was named the 2019 Pac-12 Midfielder of the Year after earning Forward of the Year honours her first two seasons.

All three finalists are taking part at the Women's College Cup, which opens Friday in San Jose, Calif.

Three finalists for the men's award will be announced Dec. 13 in conjunction with the Men's College Cup in Cary, N.C.

This year's winners will be unveiled Jan. 3 at the MAC Hermann Trophy Banquet at the Missouri Athletic Club in St. Louis.

Canadian-born Teal Bunbury (Akron) won the men's award in 2009. The son of Canadian international Alex Bunbury, Teal was raised in Minnesota and chose to play internationally for the U.S.