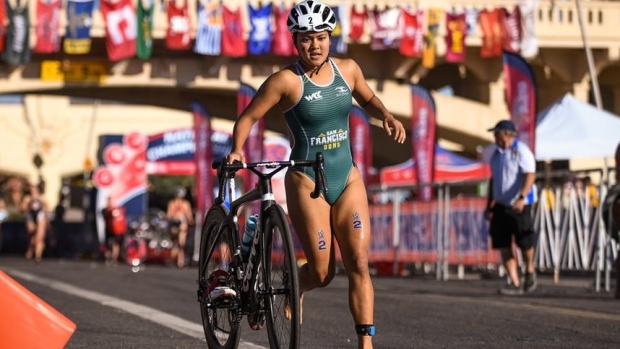 Winning a U.S. women's collegiate title with bags under eyes and a depleted fuel tank has Canada's Kira Gupta-Baltazar feeling bold about her triathlon future.

The 19-year-old from Kleinburg, Ont., claimed the individual crown and spurred her University of San Francisco team to second place Saturday in Tempe, Ariz.

The race was the unofficial NCAA championship as women's triathlon nears acceptance as a varsity sport in the U.S.

Gupta-Baltazar's third race in 15 days included a round trip across the Atlantic Ocean during that span.

She won a collegiate national championship qualifier in St. George, Utah, on Oct. 30 before hopping on a plane and placing 17th in the world junior championship in Quarteira, Portugal, a week later.

The sophomore returned to the U.S. jet-lagged and tired ahead of her Arizona race.

The combination of Dons coach Gina Kehr telling her not to worry about her result and the presence of her father Anil, who travelled from Canada to watch her race, helped her find another gear.

"When I took that pressure off myself, I realized I just had to go and race and not worry about what the result was, because I knew I wasn't feeling great," Gupta-Baltazar told The Canadian Press on Monday.

"I've always been told I'm a very mentally tough person and athlete. When that gun goes off, no matter how my body is feeling, I just react in a certain way because I have a very competitive nature.

"My dad had made the trip down to watch me. This is one of the first races he's been able to watch ever. It was very special because he gets very, very excited. I saw him at some points on the course and it would give me a little bit of energy."

She'll continue to race that distance collegiately, but now graduates to the Olympic distance of a 1.5k swim, 40k bike and 10k run internationally.

"I was a last-minute add-on and it was against a lot of older women, so I was kind of just thrown in there," she said.

"I did it for the experience and it was definitely quite tough, but I'm looking forward to the transition."

When the NCAA approved triathlon as an emerging sport for women in 2014, that started the clock on a 10-year window to prove it belongs in its pantheon of varsity sports.

At least 40 schools across all divisions must have a women's triathlon program by 2024 for it to be considered a full-fledged sport by the NCAA. The latest count is 38.

"A lot of women are forced to stop sport after high school because there aren't as many opportunities for women as there are for men at the collegiate level," Gupta-Baltazar said.

"I think it becoming an NCAA sport would be huge for women's triathlon and it would create a great pathway for future Olympians."

She competed in local Kids of Steel triathlon races as a youngster, but swimming was her chosen sport.

Gupta-Baltazar swam in age-group nationals at age 15, but realized her five-foot-two frame wouldn't move a lot of water like the long levers of Penny Oleksiak.

The ability to swim fast and a running background from playing soccer were two pieces of the triathlon puzzle, however.

Gupta-Baltazar sought Shepley out to learn more about racing at an elite level.

Shepley, of Caledon, Ont., was unaware Gupta-Baltazar had competed in Kids of Steel races he'd run until her mother, Patricia, showed Shepley a post-race picture of her daughter at age seven.

At Shepley's urging, Gupta-Baltazar flew to Rotterdam, Netherlands, to spectate at the 2017 world junior championship.

"She sat for three days in the grandstand and took notes like this was a PhD," Shepley recalled.

"By the next year, 2018, she had gone from 'I don't know what triathlon really is' to racing at the Gold Coast in the world (junior) champs."

Gupta-Baltazar, a pre-med student, competes for the Dons on a combined academic and athletic scholarship. Her freshman year was wiped out by the COVID-19 pandemic.

Pools closed across Ontario, she and half a dozen other Canadian triathletes spent last winter training in Tucson, Ariz., with Shepley and taking their university courses online.

"She's incredibly bright," Shepley said. "The last time I had a kid that smart that young was Simon Whitfield."

Gupta-Baltazar dipped her toe further into elite racing in August. She was a member of Canada's mixed relay team that placed eighth at a world championship series race in Montreal.

She posted the fastest swim leg of any woman in the field.

"It was very inspiring for me to be in that race with people that I look up to and people I admire," she said.

"It was just a really cool experience and always leaves me wanting more."

The 2024 Summer Olympics in Paris aren't out of the question for Gupta-Baltazar, Shepley said.

"She's on the right accelerated curve, she's beating people much older than her, she has skills nobody else in the country has," he said.

Gupta-Baltazar feels becoming an Olympian in less than three years is realistic.