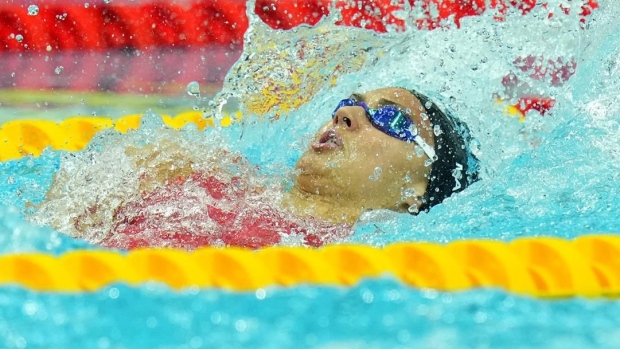 The 26-year-old from LaSalle, Ont., posted the second-fastest time in both the preliminaries and semifinals Sunday in Budapest.

Regan Smith of the U.S. was the quickest qualifier in 57.65 seconds.

Masse, a double backstroke silver medallist in last summer's Olympic Games in Tokyo, was on world-record pace in her semifinal heat at the halfway turn and finished in 58.57.

"’I’m happy to be getting through but I wasn’t expecting to go out that fast,’’ Masse said. ‘’It wasn’t necessarily what I was planning to do in that race.

‘’I’ll look at what I can improve upon. It will be stacked field as usual in the final. I look forward to the challenge.’’

‘’I can’t really be mad because it was my first final at the worlds,’’ said the 22-year-old.

"It was a step in the right direction but not the time and placing I was aiming for."

Canada opened the biannual world championship with a pair of silver medals Saturday.

Canada totalled eight medals in the pool (two gold, six bronze) plus an open-water bronze in the last world championship held in 2019 in Gwangju, South Korea.

This report by The Canadian Press was first published June 19, 2022.