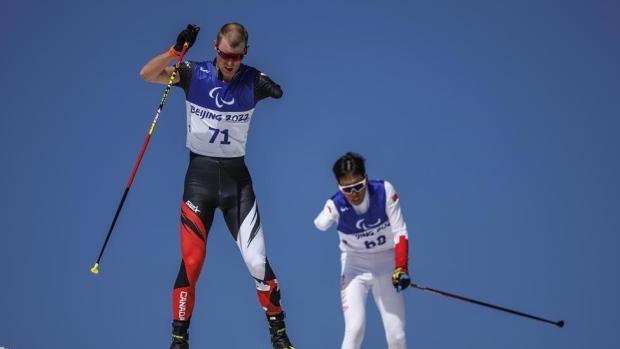 Mark Arendz set the bar impossibly high by climbing the medal podium in every one of his six races at the Pyeongchang Paralympics in 2018.

It was a Canadian record for medals won at a Winter Paralympics.

And so, a fourth-place finish in the standing 20-kilometre cross-country ski on Monday didn't sit well with the 32-year-old from Hartsville, P.E.I.

Arendz rebounded with a victory in the 10-kilometre standing biathlon event at the Beijing Paralympics on Tuesday, with one of the most dominant performances of his career.

"It fuelled I think that determination to do better today," Arendz said. "I do set the bar quite high. (But) after good races, bad races, I seem to always have another race. So, I've kind of gotten used to or familiar with that idea of taking both the highs and the lows of different races, and then being able to go to the next one and say, what does this race need? What is my focus for this race?"

Arendz skied to a time of 31 minutes 45.2 seconds, and was the only athlete in the field to go a perfect 20-for-20 on the shooting range.

The Canadian was locked in a head-to-head battle with Ukraine's Grygorii Vovchynskyi, setting up a thrilling finish. Vovchynskyi had a 14-second lead on Arendz before the two headed into the final round of shooting. Arendz hit every shot, while the Ukrainian athlete missed one, meaning he had to ski a penalty lap.

During his final stop at the shooting range, Arendz could hear Canadian team chef de mission Josh Dueck banging on the ceremonial drum, a gift to the team from Maskwacis Cree Nation.

Arendz called the drum the "the heartbeat of Canada."

"It felt pretty special to feed off that and accelerate to the finish line and take the win in front of the Canadians cheering," he said.

His gold was his second medal in Beijing, after bronze in the 6K biathlon, and the 10th medal of his career.

It was Canada's only podium performance on Tuesday, bringing the team's medal total to 13. China leads the way with 27, while the Ukraine team, which arrived in Beijing after a harrowing four-day journey amid the Russian invasion, is second with 17.

Arendz is among the busiest athletes at the Games, with three races remaining. To mimic his gruelling schedule at the Games, he trains in blocks of back-to-back-to-back time trials within a short period of time.

"And every day, it's about just making sure that after the race, every bit of energy goes into being smart and being efficient with all the different tools that I have at my disposal, whether that's physiotherapists, light jogs, things like that, that help me just flush the legs out and refresh for the next morning," he said.

Without another race until Friday, he looked forward to sleeping in.

Arendz was seven when he lost his left arm in a grain auger — a long metal tube with a spiral blade that moves the grain like an elevator — on his family's farm. He reached out to help push the grain through, and lost his balance. The auger pulled him in up to his shoulder.

Sports, Arendz has said, has been his therapy. Learning tasks such as buttoning his shirt prepared him for the daily grind of a world-class athlete.

COVID-19 has been particularly unkind to Canadian athletes, who faced tighter travel restrictions than many of their competitors, and so less international competitions.

Arendz tried to find the opportunity in being grounded.

"I definitely looked at it more from a point of view of what I could gain and what I could try differently, rather than what I was losing in terms of travel, competitions, and things like that," he said. "So, I think there was a lot to use from that point of view and then gain from what we've been through for over the last two years."

Vovchynskyi had captured Ukraine's first gold of the Games in the 6K biathlon. Arendz said he knows his rival, whose family is still in Ukraine, well.

"I was very ecstatic for him the first race where he won," Arendz said. "We go back quite a few years now. And I'm trying to support not only him, but the rest of the team as well."

On the heels of a bronze medal on Monday, Brittany Hudak of Prince Albert, Sask., finished sixth in the women’s 10-kilometre standing classification.

Canada's Para hockey team clinched a spot in Friday's semifinals, with a 6-0 victory over South Korea.

James Dunn had a hat trick and an assist, while Tyler McGregor, Billy Bridges and Liam Hickey each had singles.

"I love that Dunn had a breakout game, and we had important contributions from a lot of key players," said coach Ken Babey.

He praised the play of South Korea's goaltender, after the Canadians outshot their opponent 42-4.

The Canadians will face the winner of the qualifier between South Korea and Italy in the semis.

After going 4-0 to start the Games, Canada's wheelchair curling team is on a three-game slide including a pair of losses on Tuesday -- 9-4 versus South Korea and 9-8 against Slovakia.

"We were right there – I just didn't make the draw at the end of game," Jon Thurston, who throws last rock, said about the close loss. "Obviously, it's not the outcome we wanted, but I think it was a strong game for us."

Canada is 4-3 record with three games remaining, and needs to finish top-four to advance to the semifinals.

This report by The Canadian Press was first published March 8, 2022.