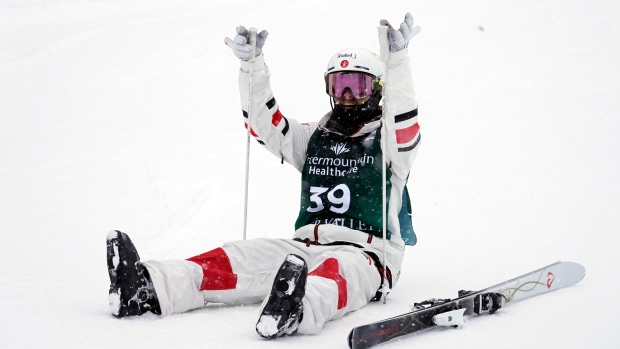 DEER VALLEY RESORT, Utah — Canada's Mikael Kingsbury completed a sweep of the men's mogul events at the Deer Valley World Cup stop with a win in the dual moguls on Friday.

"I just wanted to be able to ski well and I played the safe and clean strategy," said Kingsbury.

Kingsbury also won the moguls event on Thursday in his first competition of the season.

He missed the start of the season after he fractured his T4 and T5 vertebrae in November while training for the opening World Cup event in Ruka, Finland.

“It’s another great day for me. I dreamed of having a comeback and winning yesterday, but winning again today feels good,” said Kingsbury.

“I feel blessed my back is healed and I’m back competing against the best in the world, there’s no better feeling.”

Kingsbury now has 65 career World Cup victories in moguls and dual moguls in 111 starts. He's stood on the podium 93 times.

Brenden Kelly of Pemberton, B.C., was fifth, and Gabriel Dufresne of Repentigny, Que., was 12th.

Montreal's Justine Dufour-Lapointe was the top Canadian in 13th.

This report by The Canadian Press was first published Feb. 5, 2021.