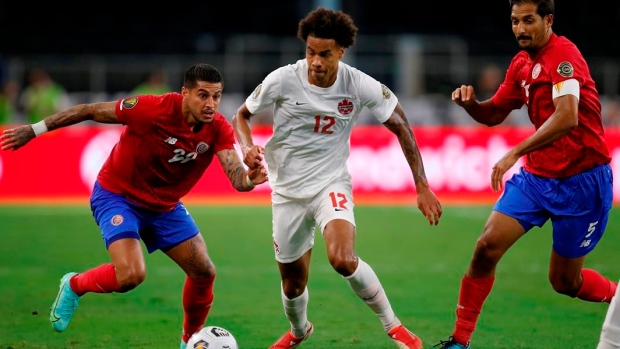 CONCACAF called the 22-year-old from Brampton, Ont., "the catalyst for Canada’s impressive run to the semifinals."

The wingback/midfielder was an offensive force for Canada, whose tournament ended in a 2-1 loss in Houston to eventual runner-up Mexico on a 99th-minute goal.

Buchanan had one goal and two assists in five games at the CONCACAF championship, continually tormenting defenders with his skill on the ball. Hs goal against Mexico was his first at the senior level in nine appearances.

Buchanan, who plays his club soccer for the New England Revolution, is in good company as the tournament's best young player. American Christian Pulisic (now with Chelsea) won the award in 2019 while fellow Canadian Alphonso Davies (Bayern Munich) was honoured in 2017.

Mexico's Hector Herrera, whose goal eliminated Canada from the tournament, won the Best Player Award with one goal and two assists in six matches.

Matt Turner was named best goalkeeper, allowing just one goals in six matches as the Americans lifted the trophy after 1-0 extra-time victory over Mexico on Sunday night in Las Vegas.

Jamaican forward Bobby Reid was honoured for goal of the tournament, a right-footed volley in a 2-0 win over Suriname in a preliminary-round game.

This report by The Canadian Press was first published Aug. 2, 2021