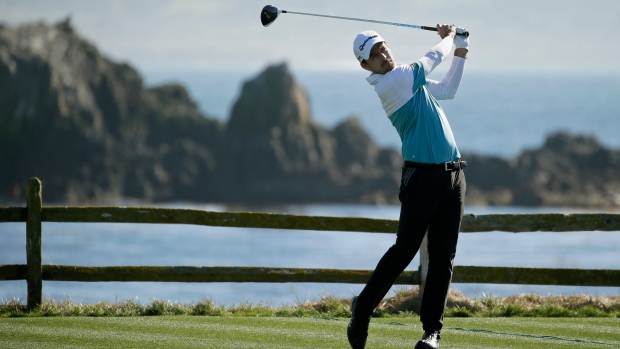 Nick Taylor finished with a flurry, making birdies on four of his last five holes on Friday to hold the lead at the halfway point of the AT&T Pebble Beach Pro-Am.

After making his first bogey of the tournament on the 12th hole at Pebble Beach Golf Links, it appeared the Canadian might wobble coming home. But birdies on 14, 15, 17 and 18 pushed him back onto the top of the leaderboard.

“I hit some really good shots coming in and made all the putts,” said Taylor who fired a 66 to sit at 14-under 129.  “So obviously it was all coming together there.”

On the 14th hole, Taylor rolled in a 16-footer, and then followed that by hitting his second shot on the par-4 15th to four feet for another birdie. On the difficult par-3 17th, his tee shot ended up nine feet from the pin and he rolled that in. His final birdie was a 17-foot putt on the famed par-5 18th hole that went in the centre of the cup.

For the day, Taylor was a lofty 3.567 in Strokes Gained: Putting, second best of those who played Pebble Beach.

The Abbotsford, B.C.-product’s putting prowess comes in part due to his experience on the poa annua grass on the greens Pebble Beach.

“I grew up on poa annua, so I have some sort of comfort level on them,” he stated. “But I feel like I've been reading them pretty well. I'm just trying to keep my head down and hit putts as good as you can. They are going to bump offline occasionally and you kind of do your best and hopefully they will go in.”

This is the first time in his six-year PGA Tour career that the 31-year-old has held the 36-hole lead. His job won’t get any easier on the weekend. Saturday he plays Spyglass Hill Golf Course, generally regarded as the most difficult of the three courses used (Monterey Peninsula GC is the third) and the wind is expected to increase in intensity.

Add to that the chase pack is littered with talent including Jason Day, who is two back, and Phil Mickelson who trails by three.

“I've got to keep my head down, keep moving forward,” said Taylor of those behind him. “There's two rounds to go, so there's a lot of golf and so tomorrow is Spyglass, so focus on that.”

Taylor has a good record at the AT&T Pro-Am, finishing inside the top 30 in three of the last four years, including a tie for 10th in 2017. Now he’ll see if he can build on that record.

Once the top-ranked amateur in the world, he won in his first year on tour, taking the 2015 Sanderson Farms Championship. He’s played steady golf since that time but, by his own admission, hasn’t been in contention enough for his liking. Still, he feels he’s a better player since the time of his victory.

“I feel like my game's definitely better well rounded than it was when I came out here and, yeah, I feel like tee to green, I'm just much better, much more consistent and experience helps as well. So I think there's a few factors, but just better overall.”

In addition to leading the overall tournament, Taylor and his amateur partner Jerry Tarde, the editor-in-chief of Golf Digest are in fourth place in the pro-am part of the event.