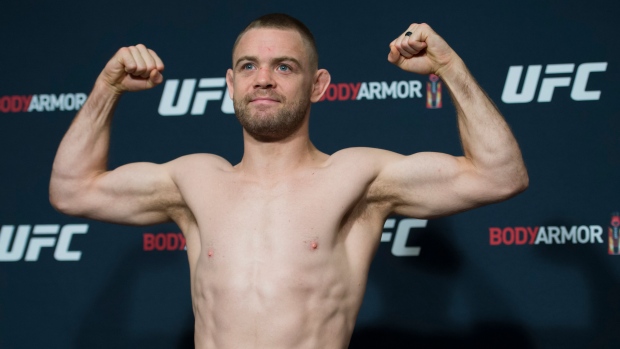 The judges scored it 30-27, 29-28, 29-28 for the 30-year-old Sabatini, a former collegiate wrestler at Rider University who holds a black belt in Brazilian jiu-jitsu under Daniel Gracie.

Sabatini (14-3-0) won his UFC debut by outgrappling Connelly, a black belt in BJJ in his own right.

"What an experience. There's no other place I'd rather be and that is one tough opponent right there," Sabatini said of Connelly.

The 35-year-old from Victoria, who now makes his home in Langley, B.C., was unable to impose his will against Sabatini, who has now won his last three bouts — and six of the last seven.

Sabatini's last loss came in February 2020, when he suffered a dislocated shoulder and elbow in a bout with James (Speedy) Gonzalez.

Connelly (14-7-0) was the early aggressor but Sabatini caught him with a shot early and ended on top as they went down. Sabatini moved Connelly against the fence, looking for an arm-triangle. Connelly fought it off but Sabatini took his back, locking in a body lock.

Connelly kept coming forward in the second round. But Sabatini took advantage of that aggression, taking him down within a minute and quickly moving into side control.

Sabatini remained in control on the ground, applying the body lock again.

Connelly avoided a takedown in the third. He turned the tables, taking Sabatini down in the final minute of the fight.

It was Connelly's first bout since his UFC debut Sept. 14, 2019, when he moved up in weight on short notice to win a decision over Brazil's Michel (Demolidor) Pereira, a breakdancing Brazilian showboat who arrived with a ton of hype.

Connelly took that fight on five days notice. Slowed by the pandemic and neck surgery, the B.C. fighter had to wait 19 months to fight again.

Connelly won fight of the night honours last time out, collecting a US$50,000 bonus as well as Pereira's $50,000 share since the Brazilian missed the welterweight non-title weight limit by one pound (at 172 pounds) and wasn't eligible for the reward.

That beefed-up bonus helped Connelly on the down payment on a new townhouse.

His return to action Saturday came as the UFC opened its doors to fans again at VyStar Veterans Memorial Arena.

Saturday marked the five-foot-10 Connelly's third outing at 145 pounds, with both bouts coming earlier in his career.

Connelly, who normally walks around at 180 to 185 pounds, has competed mostly at lightweight (155 pounds). He had to make 146, the limit for non-featherweight title bouts, for Sabatini.

He weighed in at 169.5 pounds for the Pereira bout.

Connelly was due to fight on a Portland card in April 2020, only to see it cancelled by the pandemic. He came home from a training stint in Las Vegas but began feeling the painful after-effects of a car crash the previous year.

Connelly says an MRI revealed the neck damage causing what he calls "the worst pain I've ever been in my life." The pain ran down his arms and he started experiencing severe weakness.

He underwent an operation last summer with his Victoria neurosurgeon, Dr. John Sun, telling him later that a disc had attached to the nerve, causing the pain. The problem disc was replaced with an artificial one, allowing the spine to move properly.

The extended layoff helped him cut weight. The black belt in Brazilian jiu-jitsu did a lot of dieting, coming into camp 10 pounds lighter.

This report by The Canadian Press was first published April 24, 2021