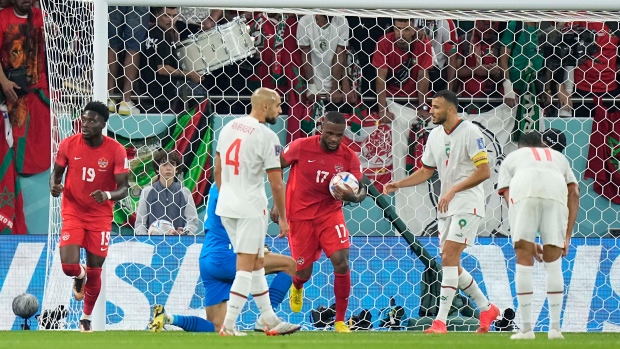 DOHA, Qatar — Canada made history in Qatar with its first-ever goal at the men's World Cup. And it turns out its only other goal was also a milestone, albeit one scored by an opponent.

FIFA says the own goal by Morocco defender Nayef Aguerd was the 100th of the tournament.

It came in the 40th minute at Al Thumama Stadium on Thursday with the Canadian men trailing 2-0. Canadian wingback Sam Adekugbe beat a Moroccan defender down the left flank and put a ball in on goal that deflected off Aguerd's outstretched foot past goalkeeper Yassine Bounou.

Despite a late surge, the Canadians could not find the tying goal and lost 2-1 to the Atlas Lions.

The 41st-ranked Canadians finished at the bottom of Group F with three straight defeats. No. 22 Morocco (2-0-1) topped the group and will play No. 7 Spain in the round of 16.

Canada failed to score in its first trip to the tournament in 1986, beaten 1-0 by France and 2-0 by both Hungary and the Soviet Union.

Canada becomes the third team in World Cup history to lose its first six matches at the tournament, joining Mexico (which lost its first nine outings) and El Salvador (six).

This report by The Canadian Press was first published Dec. 2, 2022