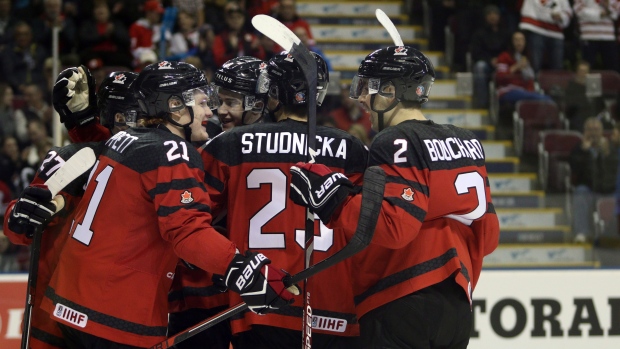 VICTORIA — Team Canada rebounded from a tentative outing against Switzerland on Wednesday with a dominant 6-1 victory over Slovakia in a world junior pre-tournament contest at Save-On-Food Memorial Centre on Friday.

Coach Tim Hunter said he was pleased with the composed effort of his team throughout the game, and he praised the calm performance of goaltender Ian Scott.

"It was good from start to finish," said Hunter. "Ian Scott played really well and real calm in net. When he had to make a stop he made a stop."

Scott, who plays for Prince Albert in the Western Hockey League, said he is a naturally calm person, a trait he credited to his mother Catherine.

Canada's final pre-tournament game is Sunday in Vancouver against Finland.

Samuel Hlavaj made 39 saves in the loss.

Hunter said he has yet to decide who will start in goal Sunday, Scott or Michael DiPietro, who was in net against the Swiss.

DiPietro faced 17 shots Wednesday and said he started to feel comfortable in the third period.

Hunter said the two goalies may each play part of Sunday's game.

"They both have to get used to playing in Vancouver, in front of that crowd, the building, the boards," he said.

Glass, who also scored Wednesday, said the team played consistently and at high speed for the entirety of Friday's game.

"I felt we managed the puck a lot better than Wednesday," he said. "We were moving pucks quick and the defence did a great job of moving the puck up. It's going to be a lot of fun with this team."

Defenceman Evan Bouchard, who assisted on Glass' power-play maker, said Team Canada will be strong with the man advantage.

"Everyone out there is a threat and that's what makes the power play most dangerous," he said. "You can't just cover one guy because all five guys on the ice have the ability to score."

Canada opens the tournament against Denmark in Vancouver at Rogers Arena on Dec. 26.

Canada and the Slovaks traded third-period goals, with Smith scoring on a wrist shot from the point and Hrehorcak replying for Slovakia with five minutes left in the contest.

Glass' power-play goal, with assists from Bouchard and Studnicka, was the only one of the second period.

The Canadians, who outshot the Slovaks 45-23, were threats to score throuhout the game, moving the puck effectively in the Slovak end.

Canada dominated the first period, opening a 4-0 lead and outshooting the Slovaks 19-7.

Comtois continued to make his presence felt on the score sheet and all over the ice with several thunderous bodychecks.

Studnicka, who also scored Wednesday against the Swiss, scored on the power play Friday on a goalmouth scramble that hit his right skate and beat Hlavaj.

The game started at a furious pace with both teams making sustained end-to-end rushes without a whistle for the first seven minutes.