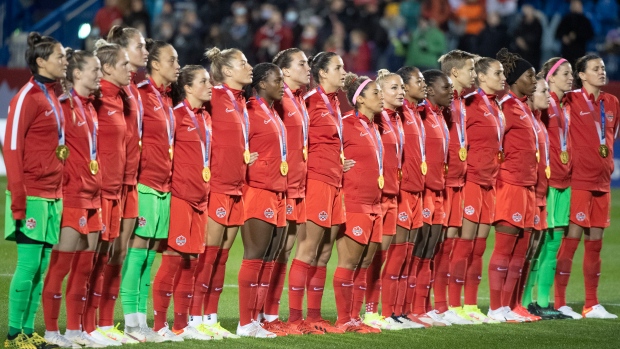 More than 70 applications were received for the posting, which sought a "dynamic, critical thinker" for a "high-profile role dedicated to launching women’s professional soccer in Canada."

Nick Bontis has made bringing women’s pro soccer to Canada a priority since being elected president of the Canadian soccer governing body in November 2020.

"It's something that has been missing … glaringly missing," he said in late February when the posting closed.

Carr-Harris spent the last 14-plus years with Maple Leaf Sports and Entertainment, most recently as manager of fan service.

An NCCP (National Coaching Certification Program) certified coach, Carr-Harris has more than 10 years of experience as a coach with youth- and university-level teams. Breagha served as an assistant coach at York University, been a head coach at the Vaughan Soccer Club and coached Quinn, a current Canadian international who goes by one name, at North Toronto SC.

"It is an absolute privilege to accept the position having been involved with the game for over three decades as a player, coach and in the professional club environment," Carr-Harris said in a statement. "As a passionate supporter of the women’s game from the grassroots through to our women’s national team, I appreciate the dedication, commitment and support of Canada Soccer and our country’s players and leaders at all levels and am excited that we are in a position to be having the discussion on how to establish the women’s professional game in Canada."

Canada Soccer says the main objective of the new position "is to spearhead women’s professional soccer with a strong Canadian identity and prioritize the development of promising young Canadians.

"In doing so, we intend to raise the level of competition and provide viable role models to inspire the country’s next generation of women footballers, coaches, referees, and administrators."

The job posting called for both sports and business experience, with "extensive knowledge of women's global soccer generally, and women’s professional club soccer specifically" plus "a university degree in business management and/or sports administration, and/or related area, plus, a minimum of five years of directly related senior management experience in the sport/business sector."

Carr-Harris will work alongside Canadian women’s coach Bev Priestman and chair a new women’s professional soccer task force that will draw on the business community, former players and lower leagues, among others.

Bontis said the posting came in part because feedback from Canadian players was "overwhelming … that they wanted an individual to lead the charge." But also because it requires someone exclusively devoted to the cause.

Bontis has said the first order of action for the new hire is to do a best-practices analysis of female leagues around the world.

But he also stressed that Canada Soccer doesn't run leagues, with private investors and clubs needing to step up.

Canada Soccer can also draw on the experience from helping create the men’s Canadian Premier League, which kicked off in 2019.

Bontis said in February he had been approached by three groups interested in a Canadian NWSL franchise with each group different in terms of existing soccer affiliation or lack thereof.

Canada Soccer has yet to fill the position of general secretary, a job vacated by Peter Montopoli in November when he shifted over to become chief operating officer for Canada FIFA World Cup 2026. Montopoli is now working for FIFA, overseeing the Canadian end of the 2026 World Cup which is being co-hosted by the U.S. and Mexico.

This report by The Canadian Press was first published May 7, 2022