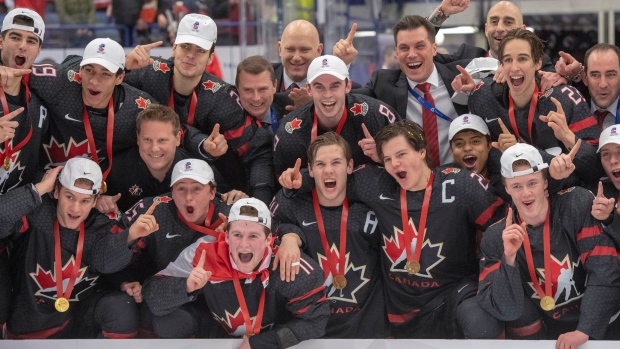 Because Hayton authored one of the most incredible chapters in Canada’s rich history at the World Junior Championship on Sunday.

Less than 24 hours earlier, Hayton writhed in pain on the ice with an audible ‘yelp’ so loud that you could hear it across Ostravar Arena.

The initial prognosis from team doctors on Saturday night was not positive. His Grade I shoulder separation almost surely would’ve put him on the shelf for a couple weeks if he was back playing for the Arizona Coyotes.

Team Canada’s brass went to bed thinking Hayton would be a longshot to play.

“We didn’t know what was going to happen,” GM Mark Hunter said. “We just didn’t know.”

But this was Canada-Russia. For all the marbles.

“I had hoped,” Hayton said. “I knew the training staff was going to do everything they could.”

The process was arduous on Sunday. Hayton went through strength and mobility testing. Then the Coyotes had to sign off on Hayton’s clearance, along with his own family.

After untold hours of manipulation, therapy, and who-knows-what kind of cocktail to provide pain relief, Hayton gave Mark Hunter a smile during warmups. The GM was watching from the bench, unusual for him, “just to double check” to make sure Hayton was good to go.

“He wasn’t going to be denied,” Mark Hunter said. “We were going to have to use handcuffs to handcuff him to the dressing room, that’s how much he wanted to play.”

Hayton didn’t just suit up for Team Canada. He scored to bring them back from the brink.

The captain who could barely lift the puck during warmups somehow blasted a snapshot off the post and in to erase a 3-1 deficit and make Canada whole again.

“I just let it fly,” Hayton said. “And the rest is history.”

Fourth liner Akil Thomas finished the job minutes later, scoring his only goal of the tournament, to crown Canada as the 2020 World Junior champion with a 4-3 win that won’t soon be forgotten.

For the 18th time, Canada reigned supreme at the World Juniors and the first time Canada brought home gold from an overseas tournament since 2008. Canada failed to hit the podium at all in their last three tournaments played on bigger European ice.

Sunday marked the fifth time Canada (5-4) topped Mother Russia in the final since the gold medal game was first introduced in 1996.

And man did this one feel sweet, especially after the Big Red Machine dealt Canada the country’s most lopsided loss in its sterling, 43-year run at the World Juniors. This flipped the script on 2011, Russia’s last gold medal, when Canada blew a three-goal lead in the third period in Buffalo.

“Storybook ending,” said Joel Hofer, who was named the top goaltender with a perfect 5-0 record and .939 save percentage. All nine times Canada has won gold overseas, their netminder was named the best goaltender.

Maybe in some ways, Sunday played out exactly as it had to for this Team Canada. Because there were no easy roads in Ostrava.

This was a heavyweight title fight between two world hockey powers and old school, bitter rivals. Canada killed off four penalties in the first period alone, then trailed by two goals early in the third period.

Any one of the five or six incidents that Canada went through - physically or mentally - at this 12-day grind of a tournament might have broken a lesser group.

Forget the Dream Team, this was Canada’s Redeem Team.

They were embarrassed in a 6-0 blowout to Russia, 18-year-old star Alexis Lafreniere left with what appeared to be a serious injury, their captain Hayton nearly caused an international incident at centre ice when he failed to remove his helmet, and Veleno earned a one-game suspension for headbutting … and that was just Day 3.

“To face that much adversity and always respond is something special,” said Lafreniere, who was named the tournament MVP. “No words can really describe that. It’s the best moment of my life, for sure.”

Coach Dale Hunter switched netminders from Nico Daws to Joel Hofer. He shuffled the lines when sniper Nolan Foote was ejected 53 seconds into the quarterfinal against Slovakia. Then Canada leaned on 17-year-old defenceman Jamie Drysdale in the quarterfinal when top pair blueliner Bowen Byram fell ill.

Through it all, Canada kept climbing. All the way to the top.

“We talked the whole time about meeting at centre ice at the end of the tournament,” Ty Dellandrea said. “We just did it. That’s unbelievable.”

“Believe in yourself and good things happen,” Hofer said.

Even the tough-as-nails former NHL player-turned coach Dale Hunter was in tears on the bench as the boys celebrated on the ice.

“You can’t put words to it,” Dale Hunter said. “It’s so hard to get there. The competition is extreme. It’s tough. But the kids dug deep. We didn’t give up, we were down. It was one of those games that we really had to battle.”

With the result was a realization from the Hunter brothers, the pride of Petrolia, Ont., who finally said ‘yes’ to Hockey Canada and teamed up to take on the World Juniors.

“It’s a special moment for us, because it was a long road here,” Mark Hunter said. “God, you get in this tournament and you don’t know how tough it is to win until you’re involved in it. You all sit there from the outside, ‘Oh, it’s OK,’ but then you get involved in it, she’s a tough tournament.”

That toughness and battle was on full display, embodied by the captain when Hayton stepped onto the ice in the gold medal game.

“What a captain, what a leader,” Lafreniere said. “He fought the pain.”

The shot even surprised Mark Hunter: “I didn’t think he had that shot. He lost some strength in it, of course.” Hayton said: “I definitely didn’t hold back on that one.”

“It takes a lot of guts,” Dellandrea said. “To be injured like he was, most people wouldn’t play. The will, the heart to go win it for Canada - he’s a special kid.”

Hayton just as easily could have been the goat in Ostrava. His helmet kerfuffle didn’t register as much of a ripple in the Czech Republic, partly because Russian coach Igor Larionov diffused the situation. But back home, some fans were calling for the ‘C’ to be ripped off his sweater.

Instead, as the kid with the bum shoulder lifted the trophy overhead, Hayton showed what it means to be Canadian. He said sorry, admitted his mistake and asked for forgiveness. He played through immense pain, leading Canada to gold on adrenaline.

And as ‘O, Canada’ played with the red Maple Leaf flying high, it produced an ecstasy and memory for Hayton and Team Canada that drowned out all the pain.

“I was definitely sore,” Hayton said. “But right now, I don’t feel a thing.”