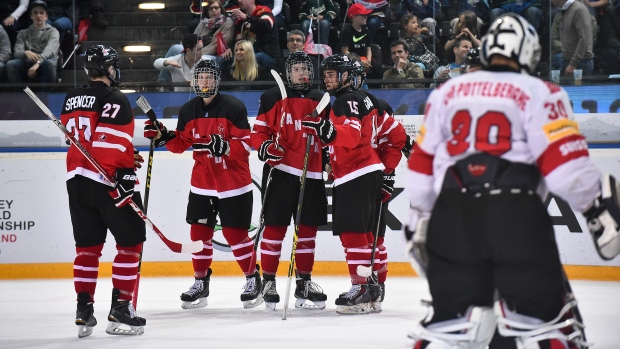 ZUG, Switzerland - Glenn Gawdin scored twice as Canada won bronze for the second straight year at the world under-18 hockey championship with a 5-2 win over host Switzerland on Sunday.

Gawdin opened the scoring and had Canada's key fourth goal to help the Canadians salvage the tournament after a 7-2 semifinal loss to the United States on Saturday.

The Americans beat Finland 2-1 in overtime later Sunday to win their second title in a row and ninth overall.

Jansen Harkins, Deven Sideroff and Brett Howden also scored for Canada, which came to the tournament hoping for its fourth gold medal overall and first since 2013.

Damien Riat and Marco Miranda scored for Switzerland, which was looking for its first medal since winning silver in 2001.