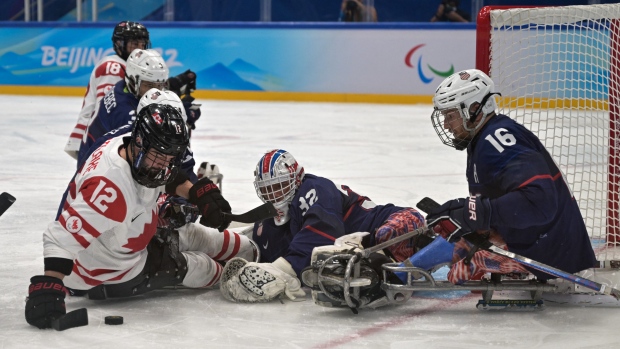 BEIJING — Canada settled for silver in hockey after dropping the gold-medal match to the United States 5-0 on the final day of the Beijing Paralympics Sunday.

Brody Roybal and Declan Farmer each had two goals and an assist, and Josh Pauls added one goal and one assist for the United States.

Dominic Larocque made 15 saves for Canada, which earned its 25th and final medal at the Beijing Paralympics.

Canada closed out the Paralympics with eight gold, six silver and 11 bronze.

Farmer and Roybal scored 25 seconds apart in the first period to stake the Americans to a 2-0 lead.

Roybal made it 3-0 at 2:39 of the second. Pauls added to the lead five minutes later, and Farmer sealed it with his second of the game 5:57 into the third.

The Americans defended their gold medal after defeating Canada 2-1 in overtime in the final four years ago in Pyeongchang.

Canada also lost 5-0 to the U.S. in the preliminary round to open this year's tournament.

This report by The Canadian Press was first published March 12, 2022.