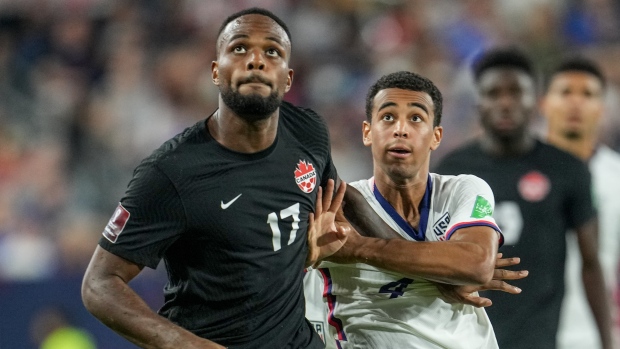 What was expected to be a capacity crowd of 24,000 for Canada's high-profile World Cup qualifier against the U.S. on Jan. 30 at Hamilton's Tim Hortons Field will now be restricted to 12,000.

The game sold out in three hours last month, with Canada Soccer riding the on-field success of John Herdman's team.

Canada Soccer, in following relevant public health guidelines, says it will cancel all tickets sold and offer a new window to buy tickets for the reduced-capacity configuration.

Refunds will be provided to all ticket-holders within two to four weeks. All ticket purchasers will be provided the opportunity to buy tickets through a "dedicated pre-sale window" beginning at 10 a.m. ET on Jan. 25, with Canada Soccer contacting original ticket-buyers with details on how to access tickets for the reduced-capacity configuration.

A public sale will follow Jan. 26 at 10 a.m. ET should inventory remain available.

"We prioritize the safety of all players, staff and fans and want to acknowledge the diligent and ongoing work, not only these past few weeks, but throughout the final round of FIFA World Cup qualifiers, of our partners at all levels of government to ensure that we are able to play in front of our fans on home soil," Canada Soccer president Nick Bontis said in a statement.

All fans attending the match will have to provide proof of vaccination and wear masks unless eating or drinking, among other requirements.

The Canadian men drew announced crowds of 48,806 and 44,212 in Edmonton for November wins over Costa Rica and Mexico, respectively, at Commonwealth Stadium. The Mexico game was played in a snowy deep freeze.

An October victory over Panama drew a capacity crowd to Toronto's BMO Field, with 26,622 on hand after local authorities eased pandemic-related restrictions.

Come March the top three teams will book their ticket to Qatar 2022. The fourth-place country will face a team from Oceania in an intercontinental playoff to see who joins them.

The Hamilton game, a first for the Canadian men, is sandwiched around away matches at No. 76 Honduras on Jan. 27 and No. 70 El Salvador on Feb. 2.

Canada tied the U.S. 1-1 when they met in World Cup qualifying last September in Nashville. Prior to that, the Americans eked out a 1-0 victory in July at the Gold Cup in Kansas City, hanging on for the win after scoring 20 seconds in.

The Canadian men registered a famous 2-0 victory over Americans in October 2019 at BMO Field, ending a 34-year, 17-match winless run against their North American rivals.

This report by The Canadian Press was first published Jan. 20, 2022