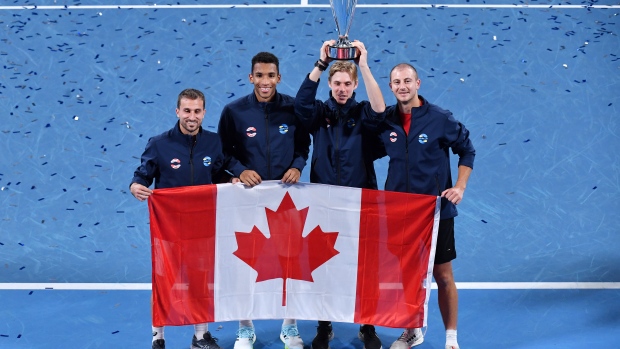 SYDNEY, Australia — Felix Auger-Aliassime clinched the ATP Cup title for Canada on Sunday with a 7-6 (3), 6-3 singles victory over Roberto Bautista Agut to give his country an insurmountable 2-0 lead against Spain.

Denis Shapovalov opened the match for Canada with a 6-4, 6-3 win over Pablo Carreno Busta.

“The emotions are unbelievable," Auger-Aliassime said. “There’s no better feeling than winning. We left everything out there."

The results capped a remarkable turnaround for the Canadians after they dropped their first four matches at the annual team competition.

"As the week went on I think we played some really good matches and we got more and more belief," said Auger-Aliassime. "But I think the trust and the belief never went away the whole week for everybody on the team."

The 16 teams in the field were divided into four groups, with the winners of each group advancing to the semifinals.

Canada opened with a 3-0 loss to the United States before rebounding with wins over Germany and Great Britain to finish first in Group C.

Auger-Aliassime, from Montreal, and Shapovalov, from Richmond Hill, Ont., won a deciding doubles match against Russia to knock out the defending champions.

And with the title on the line, they played their best tennis Sunday to defeat two-time finalists Spain.

Auger-Aliassime saved 10 of the 11 break points he faced and had 15 aces. Shapovalov, who lost four of five previous matches against Carreno Busta, was also in form.

Brayden Schnur of Pickering, Ont., and Toronto's Steven Diez were also on the Canadian roster.

"Definitely huge credits to everyone on the team for believing and fighting and putting the work in," Shapovalov said. "I mean these guys did such an amazing job on the bench and obviously Felix on the court.

"I mean it was just a great team effort."

Schnur was a late replacement in the opening singles match on Jan. 1 after Shapovalov couldn't play due to fatigue. He was still recovering after contracting COVID-19 at a recent tournament in the Middle East.

"Obviously we had a really tough start," Shapovalov said. "But we kept fighting, kept believing."

The ATP Cup made its debut in 2020. It also serves as a warm-up event for the Australian Open.

It was Canada's first appearance in the ATP Cup final. Rafael Nadal anchored Spain to a 2-0 win over Canada when the teams met in the Davis Cup final in 2019.