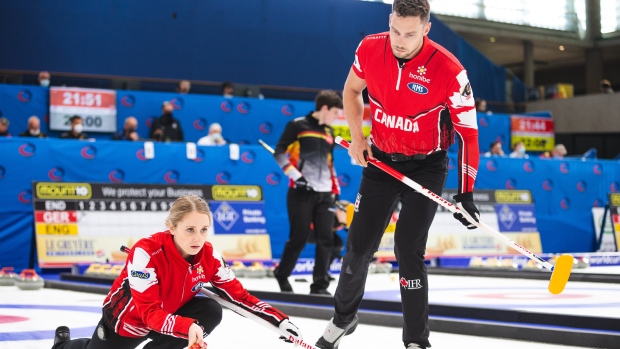 GENEVA — Canada's Jocelyn Peterman and Brett Gallant won their final preliminary matches Thursday at the world mixed doubles curling championship to finish second in their group and set up a playoff showdown with Norway.

Peterman and Gallant, who were already guaranteed a playoff berth heading into the final day of round-robin games, thumped Australia 10-2 and downed the United States 8-5 to finish second in Group B at 8-1.

Scotland also won both of its matches Thursday to finish atop the group at 9-0 and book a spot directly into the semifinals.

Norway was one of three teams to finish atop the Group A standings at 7-2, but finished behind Switzerland and Sweden in the tiebreaking draw shot challenge.

Switzerland moved on to the semifinals, while Sweden and Germany will meet in the other qualification game.

The qualification games and semifinals are scheduled for Friday, with the medal games on Saturday.

“We have the experience of playing in these playoffs," Gallant said. "We know it’s difficult but you can just take it one game at a time, control the things we can control, play our best and let the chips fall."

Winnipeg's Peterman and Gallant, of St. John's, N.L., took control of the match against Australia with three points in the third end, followed by a steal of two in the fourth and three in the fifth to build a 10-1 lead. The Australians conceded after scoring one in the sixth.

The U.S., playing for the third playoff spot in Group B, opened with a steal of one in the first end against the Canadians. But Peterman and Gallant were up 7-3 after laying three in the sixth end thanks to a in impressive shot by Peterman.

The United States played a freeze that cut down Canada's scoring opportunities, but Canada had a long angle-raise opportunity on a single Canadian corner guard in play.

Peterman threw it perfectly to score the three points.

“I don’t know. I haven’t skipped in a long time and it’s a lot more fun making those on your last shot."

Peterman was asked where it ranked among her best shots.

"It’s up there," she said. "It was just kind of a relief when it happened and fun to throw."

The Americans made a game of it with two in the seventh to cut Canada's lead to 7-5, but the Canadians put the game away with one in the eighth and final end.

The loss to Canada, coupled with German wins over the Czech Republic and England, dropped the Americans to fourth in the Pool B standings and out of the playoffs.

Canada has never won a world mixed doubles title. Peterman and Gallant, who are engaged to be married in June, won a silver medal in 2019 in Stavanger, Norway.

The mixed doubles is being held in conjunction with the senior championships in Geneva.

Canada's senior women's team from Saskatoon, skipped by Sherry Anderson, finished 5-1 and second overall in Pool A after capping the round robin with a 10-2 win against Italy’s Lucilla Macchiati.

Both North American clubs had entered the game at 5-0. With the win, White finishes the round robin undefeated and will be among the top seeds heading into the eight-team playoffs, which begin Friday.