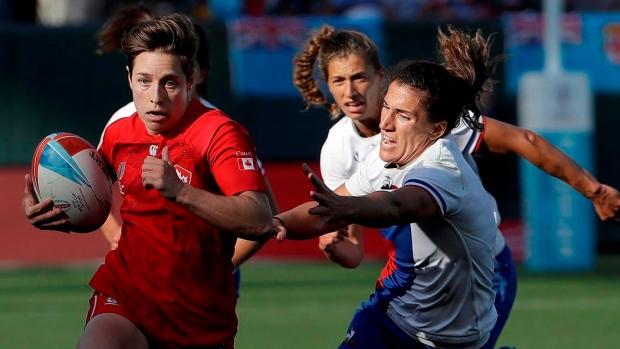 After finishing a disappointing sixth in the HSBC World Rugby Sevens Series opener in Glendale, Colo., the Canadian women's team hopes to get back on track in Dubai.

Canada opens play Thursday in a pool with Brazil, Russia and the U.S.

Adding salt to the Canadian wound in Glendale in October was the fact that Canada had the best of both finalists — Australia and the U.S. — before stumbling in the final seconds and falling by the wayside.

"It was kind of weird to finish sixth," said Canadian coach John Tait. "It felt like we should have beat both of them."

Canada opened in Glendale with wins over Fiji and Spain. But a 26-26 tie with Australia in the final group game — Charity Williams scored with no time remaining to tie the score but captain Ghislaine Landry missed the conversion — meant a quarter-final matchup with the U.S.

The Canadians, helped by an American in the sin-bin, led 19-12 at the break and 26-22 after a Karen Paquin try with 80 seconds remaining. But disaster struck on the ensuring restart when Cheta Emba hauled in the kick and scored with five seconds remaining for a 29-26 American victory.

Canada then gave up two late tries in a 12-7 loss to Spain in the fifth-place playoff.

"We just made too many mistakes," lamented Tait.

On the plus side, Pam Buisa proved to be a force of nature for Canada — running over would-be tacklers.

And Britt Benn (sprained knee) and Sara Kaljuvee (calf) return from injury for Dubai where the Canadians were runners-up a year ago. Canada outscored the opposition 127-45 in five straight wins before falling 26-14 to New Zealand in the final.

The Black Ferns, a four-time winner here, is looking to become the first women to win back-to-back titles in the desert. The U.S., meanwhile, is bidding to claim its third straight title, having won last season's finale in Biarritz and the season opener in Glendale.

The top four secured automatic qualification to the 2020 Tokyo Olympics. Performance over the last two years ahead of Tokyo will be factored into the Olympic draw.

"We just want to keep building some consistency in our play and make sure that we take as many points as we can so we're in position in the last few series to take one of the top two seeds," said Tait.

Dubai is the first of six joint men's and women's events this season, which marks an expanded eight-stop women's circuit.

The Canadian men are in a pool with New Zealand, Samoa and Wales in Dubai, the first of 10 stops on their circuit.