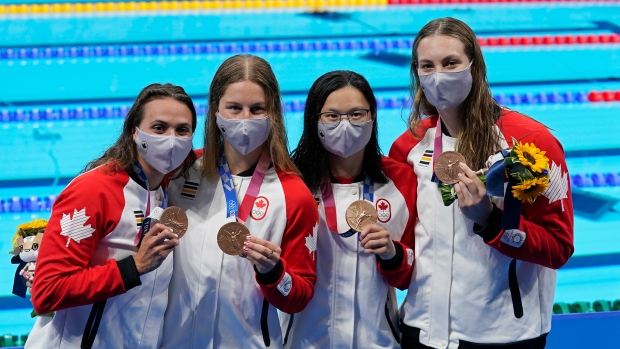 TOKYO — Canadian athletes are analyzing which pandemic adaptations are now a permanent part of their lives as Tokyo's Summer Olympics near the end.

Every athlete among Canada's 371 in Tokyo gave up familiar and took on unfamiliar when the global COVID-19 pandemic descended upon the world.

Basement and garage workouts, "cold swims" in the pool, group training via Zoom and virtual camps and competitions were among pandemic pivots the country's Olympians adopted, not knowing if those would be enough to keep pace with their international rivals in Tokyo.

Canadians who stood on the podium and want to do so again in Paris in 2024 won't jettison all modifications and completely revert to their pre-pandemic training and schedules.

"I think after this year, a lot of changes will happen in the sport because people have been able to realize that different things worked," said swimmer Kylie Masse, who won a pair of backstroke silver.

"There isn't just one pattern for success."

Canada's swim team lost 122 days in the pool, which was more than any other top swimming nation in the world, in the first stage of the pandemic. The majority of swimmers had zero international events for a year and a half.

Olympic trials were postponed twice, which made Canada the last to hold them.

One training adaptation was the "cold swim" in which athletes were told to put on their racing suits, dive into the pool and swim full out in a race simulation.

"Hopefully competition will come back, but I think there were a lot of lessons learned from the pandemic of how to do things differently and innovate," Swimming Canada high-performance director John Atkinson said.

Athletes' instincts tell them the more and the harder they train, the better their chances of success.

Masse, of LaSalle, Ont., discovered lost days in the pool didn't hurt her in Tokyo.

"It's OK to get out of the water for a bit," she said. "Now if I take a week off, I'm not going to be going crazy (thinking) I need to get back in the water."

The Canadian was fourth in beam behind American bronze medallist Simone Biles, who made headlines withdrawing from other gymnastic events to focus on her mental health.

Black believes she and other athletes will take a page from Biles' book.

"Your mental health, when you need to take a bit of time, you can do that," Black said. "We put so much time and dedication into the sport that you need to kind of give yourself time back as well. We learned a lot about that.

"You don't have to be training all the time."

"I can get really fit at home by myself," said the 30-year-old from Richmond, B.C. "I don't need those Australian training camps every winter, as nice as they are.

"I now have the confidence and knowledge I can do the work that needs to be done to be my best self at home, through a Vancouver winter, through the rain and come out with an Olympic medal."

"Through the pandemic I took up road biking and I really love it," she said. "I think I'll definitely keep that in my training program."

Athletes lose fitness while travelling and racing because they don't have time to properly recover, according to Cycling Canada high-performance director Kris Westwood.

What staying home and training for months does for an athlete needs to be studied, he said.

"We've seen some different patterns emerge from that, but whether it's actually benefitted the athletes in the short term is an open question," Westwood said. "Whether it's going to have a positive effect on their longer-term careers is also an open question.

"It's too early to tell, but like everybody else, we've learned to communicate better, to work remotely, and to be really nimble and creative in actually figuring out how to train athletes."

Canada's COVID-19 restrictions were arguably some of the strictest among sporting countries, but the adaptations adopted by athletes could be competitive advantages in the future, said Own The Podium chief executive officer Anne Merklinger.

"The learning from the last 16 months will be very important for both summer and winter sports," she said. "What is the right balance of training and competition? What is an optimal yearly training program for each athlete and each sport?

"That reflection and analysis is critical. On top of that, we only have three years to Paris."

— John Chidley-Hill and Joshua Clipperton contributed to this story.