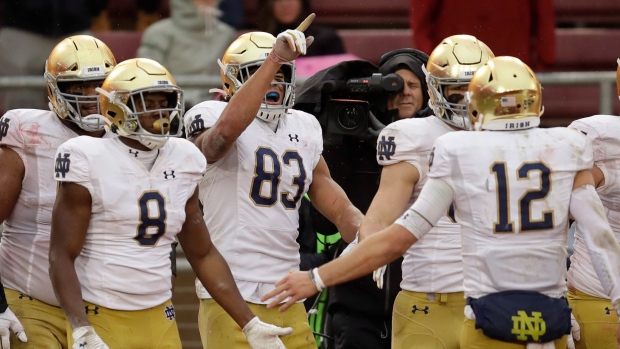 Book threw two TD passes to Chase Claypool and also connected with Tony Jones Jr. and Tommy Tremble to help the Fighting Irish (10-2, No. 16 CFP) snap a five-game losing streak at Stanford Stadium. Notre Dame also put together three straight seasons of at least 10 wins for the second time in school history, having previously done it under Lou Holtz from 1991-93.

Davis Mills threw two TD passes for the Cardinal (4-8), who have lost four straight for the first time since 2007. Stanford also finished with its first losing record since 2008, ending a streak of 10 straight bowl bids.

Notre Dame fell into a 17-7 hole before scoring two TDs in the final 3:01 of the first half to take a 21-17 lead at the break. Book threw a 6-yard TD to Tremble after Isaiah Foskey blocked a punt and then capped a three-play, 76-yard drive with a 41-yard strike to Claypool.

Book then had a 26-yard scramble on fourth-and-2 to set up an 8-yard TD pass to Claypool that made it 28-17 in the third quarter, putting the Irish in control.

Notre Dame: The Irish responded from a lopsided loss to Michigan in late October to win their final five games of the regular season. Book has been especially sharp late in the season with 12 TD passes and no interceptions in the final three contests. His 33 TD passes on the season are second in school history to Brady Quinn's 37 in 2006.

Stanford: The Cardinal scored on three of their first four drives on two TD passes by Mills and a short field goal after Tucker Fisk committed a false start on fourth-and-goal from the 1. Stanford then had seven punts and a fumble the next eight possessions before getting a late TD run from Cameron Scarlett. It was a fitting end to a disappointing season as the Cardinal posted their worst record since also going 4-8 in coach Jim Harbaugh's first season on The Farm in 2007.