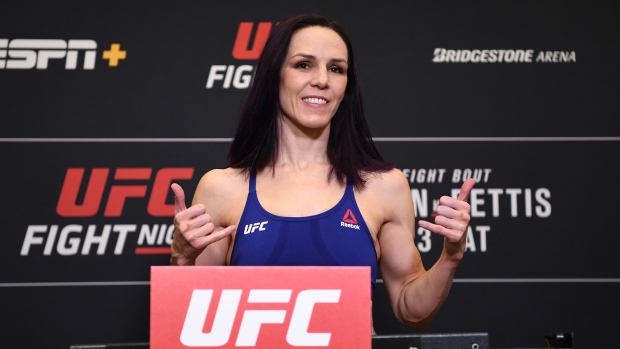 Canadian Alexis Davis returns to action Saturday with a surgically repaired shoulder and a renewed zest for fighting.

The 36-year-old from Port Colborne, Ont. who now makes her home in California, steps into the cage for the first time in 19 months when she takes on Sabina (Colombian Queen) Mazo on a UFC Fight Night card in Las Vegas.

"I believe in myself 100 per cent," she said in an interview. "And I feel like I'm a way better fighter than I've been able to showcase.

"People don't understand. it's not about your athletic ability so much as it for your mindset, And I think that's been a huge change for me, and you know what, I like new beginnings. I feel really good. I feel happy. I'm actually excited to fight. That's something I feel like I was missing about my last few (fights). I didn't quite have that same energy, same excitement that I've had before.

"It's hard after you've been doing it so long."

Davis had her first pro fight in 2007 -- losing to fellow Canadian Sarah Kaufman -- and competed in Strikeforce and Invicta FC before moving to the UFC in 2013.

Thirteen months and three wins later, she challenged (Rowdy) Ronda Rousey for the UFC bantamweight title at UFC 175. Rousey, then unbeaten and at the height of her powers, lived up to her billing as 10-1 favourite when she needed just 16 seconds to end the fight.

A lot happened in those 16 seconds, none of them good for Davis.

Rousey hurt the Canadian with a punch to the face, connected with a knee, then took her down with a hard judo throw, with Montreal referee Yves Lavigne stepping in seconds later after Davis absorbed some 10 rapid-fire blows to the face.

"There's a lot of stuff that I didn't do that I wanted to do … But live and learn from your mistakes," she said after the fight. "Just get back up and keep fighting."

Davis won three of her next four fights and took time out to have her son before dropping her last three outings.

Davis lost a decision to Viviane Araujo last time out at UFC 240 in Edmonton in July 2019. The defeat prompted her to seek help for her shoulder which had been damaged two fights earlier against Katlyn Chookagian in July 2018.

"Over time, just that wear and tear, it just got worse and worse," said Davis, noting that her hand kept dropping in training and fights because of the shoulder problems.

She had surgery in early 2020, subsequently rehabbing and taking some classes to move farther down the road towards becoming a firefighter. She also got to spend more time with son Rafael, who turns five next week.

"Shoulders take so long to recover from," she lamented.

But the hard work has paid off, despite the occasional ache. "I've been able to strengthen it, rebuild it and it feels great now," she said.

"I feel so much better and so much more confident now that I've got it repaired," she added.

Davis is moving back to bantamweight (135 pounds) after four fights as a flyweight (125 pounds). She is currently ranked 11th among flyweights.

The five-foot-six Davis, who is 6-5-0 in the UFC, made the move because she had had more success as a 135-pounder and because it makes for less stress.

"I get to enjoy food a little bit more," said Davis, who got into combat sports after taking a kickboxing class in Port Colborne.

In other Canadian UFC news:

— Flyweight Gillian (The Savage) Robertson’s fight against Miranda (Fear The) Maverick has been rescheduled for UFC 260 on March 27 in Las Vegas. The two were scheduled to meet Feb. 13 at UFC 258 but Robertson, a native of Niagara Falls, Ont., who makes her home in Port Saint Lucie, Fla., had to withdraw due to a non-COVID-related illness.

— Felicia (Feenom) Spencer takes on Danyelle Wolf on a May 22 Fight Night card. It's the first fight for the Montreal-born Spencer, who now calls Orlando home, since last June when she lost a decision to featherweight champion Amanda (Lioness) Nunes at UFC 250.

— Middleweight Marc-Andre (Power Bar) Barriault returns from a six-month doping suspension to fight Morocco's Abu (Gladiator) Azaitar at UFC 260 on March 27 in Las Vegas. Barriault, a native of Gatineau, Que., who fights out of Quebec City, blamed the low-level positive test on tainted supplements with the UFC backing him.

— Montreal lightweight John (The Bull) Makdessi meets Chile's Ignacio (La Jaula) Bahamondes on an April 10 Fight Night card, with the venue yet to be announced.

This report by The Canadian Press was first published Feb. 25, 2021