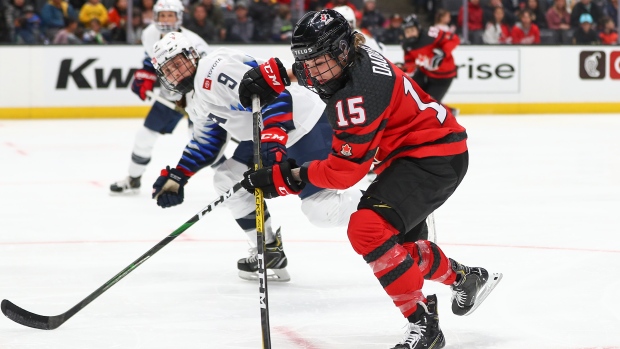 Mélodie Daoust is normally a cheerful person. The forward for Canada’s women’s hockey team is known for having a near-permanent smile on her face.

But after the 2021 IIHF Women’s World Championship that was set to take place in Halifax and Truro, N.S., was abruptly cancelled this past spring due to provincial concerns about COVID-19, Daoust admits it was difficult to stay optimistic.

“I'm not gonna lie, it was a very hard day​,” she told TSN. “I think we did not expect that. We knew that the pandemic was going well in Halifax. So, obviously, it kind of took us by surprise.”

Daoust is back with the national team for camp in Calgary, with the rescheduled world championship set to take place in the city beginning on Aug. 20. Canada kicks off the tournament against Finland, with all the games live on TSN.

This is the first time the Canadian team has been back training as a group since April. When news of the cancellation broke, the squad was already in Halifax preparing for the tournament. Now 28 players are training together at WinSport Arena as part of the Olympic centralization roster, with five final cuts expected to be announced on Thursday.

“I think as a group, we face so many challenges. So that was just another bump in the road,” Daoust said about the tournament’s initial cancellation. “We just wanted to be ready when we were gonna have the green light, and here we are back in Calgary. We have trained all summer and we're really excited to compete.”

Adversity is not new for women’s hockey. Last year, the world championship was again scheduled to take place in Halifax and Truro before its cancellation due to the pandemic. The Canadian women in the PWHPA weren’t able to take part in their own leg of the Dream Gap Tour until this past May, while their American counterparts were able to hit the ice in February.

Daoust said she has learned to lean on the support of her teammates during these various trials.

“I think we all have our ups and downs,” she said. “I think that's why we play a team sport. When we have a down, there's someone else beside you that is ready to pick you up…. I think it's really important for us to stay optimistic and be ready to face challenges, because challenges are going to happen all year.”

Daoust had more hardships when she missed May’s Dream Gap Tour in Calgary after undergoing surgery on her left wrist to help repair an ongoing injury. She was originally supposed to have the surgery after the world championship in May, but the cancellation meant she had to push it up to be ready for camp this summer.

The native of Valleyfield, Que., is no stranger to difficult times. Four months after winning gold in the 2014 Sochi Olympics, she tore her ACL and missed most of her season with McGill University.

She was left off the roster for subsequent world championships and had to fight her way back into the mix for the 2018 Olympics.

“My personality is always to see the good and the bad. My injuries are a big part of that,” she said. “Every time I get injured, I need to refocus and give myself new goals and new challenges.”

Daoust seems to relish taking the road less travelled. She is the only player on the current roster to have played for a Canadian university, spending five years at McGill.

Daoust said coaches repeatedly told her that if she wanted to make the Canadian Olympic team she needed to play in the NCAA, and she made it a goal to prove them wrong.

“I’ve been to two Olympics and I push myself every day to make sure I attain that goal. I had five great years at McGill University. I'm very proud to be a Martlet,” she said.

It was during her time at McGill that Daoust became the youngest player on the Canadian team that won gold at the Sochi Games. Now at 29, she is a leader on the squad.

“I went from a fourth liner to what I am today,” she said. “I'm really proud that I was able to fill in all those roles because it makes me the person and the player I am today. I think now I can help those younger players because I've been in their shoes.

“I think I try to lead by example. I'm not someone that's gonna speak too much. But my work ethic will be something that I hope the younger [players] are looking after. I think I try to bring lots of lightness in the room. I bring my smile.”

Daoust will be playing in her second world championship after making her tournament debut in 2019. After being named the MVP of the 2018 Olympics, Daoust finished with four assists at the 2019 women’s worlds.

“I'm not really looking at what I've done in the past,” she said. “Every game, I try to be my best, and if that's with a goal or an assist or just making plays in the defensive zone, that's what I’ve got to do. I need to be a team player and do everything I can to make the team win.”

It’s that mentality that has Daoust focused on changing the colour of the medal at the worlds. The team hasn’t won gold at the event since 2012, and two years ago, Canada won bronze, the country’s worst-ever finish at a major tournament.

“I think we're a much different team,” said Daoust. “That 2019 world championship has taught us so many things…. I can guarantee you that our group is ready to compete. We have a new identity, and really looking forward to show the world what Team Canada can do.”