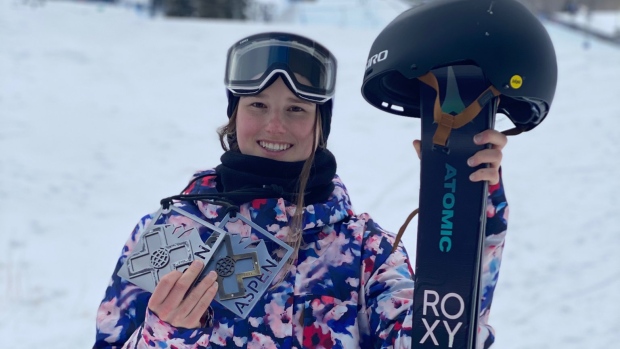 Deteriorating conditions on Aspen's Buttermilk Mountain forced the postponement of some events Saturday, but the women's afternoon slopestyle went ahead under darkening skies.

Gu, who was born in the United States but competes for China, won gold Saturday.

The 17-year-old also won Friday's halfpipe gold and took bronze in big air Friday for a busy and productive 24 hours.

"Today, I went in with no expectations," Gu said. "I just wanted to ski my best. The weather was tough for me, but it's tough for everyone.

"It was definitely a super-hectic practice and competition schedule. I've been taking naps in between every event.

"I was a competitive runner for eight years so I'm attributing some of my endurance to that.

"Overall, I think it's really just the adrenalin of my first X Games and just being so hyped to be here, that it was able to get me through."

Oldham, a 19-year-old from Parry Sound, Ont., placed third in slopestyle after taking silver in Friday's big air one spot ahead of Gu.

"Today has been awesome," Oldham said. "It was definitely challenging with the weather.

"Being definitely one of the smaller (athletes) it's definitely hard to get speed so I'm super-happy with my run and being able to pull it together even though the weather wasn't perfect.

"Definitely not my hardest tricks throughout the whole run, but there were a couple things I was super-stoked on."

Britain's Isabel Atkin was second Saturday in a five-woman final.

Gu complimented Oldham on one of the Canadian's tricks.

"Megan's switch-nine was the sickest thing I saw all day," Gu said. "I was jumping around up top. I was so hyped. Mad props to her."

Later that Saturday, Canadian Alex Beaulieu-Marchand finished fourth at the men's ski big air event. His two best runs combined for a score of 86.00, three points away from a podium finish.