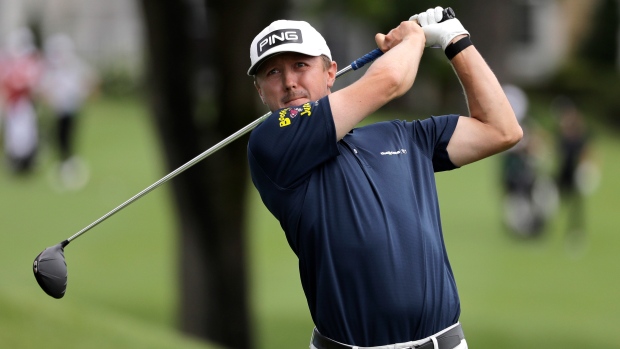 CROMWELL, Conn. — Mackenzie Hughes had the best round of his professional career Thursday morning, but in his mind it's still not the best he's ever played.

The Canadian shot a 10-under 60 at the PGA Tour's Travelers Championship, making 10 birdies and no bogeys to lead Rory McIlroy, Xander Schauffele and Viktor Hovland by three shots after the first round.

"I've probably had more like meaningful rounds of say 65 or 66, but as far as going low and how I felt about the game, it's definitely probably top five," Hughes told reporters over a remote news conference.

Adam Hadwin of Abbotsford, B.C., is the only Canadian to shoot under 60, carding a round of 59 at the 2017 CareerBuilder Challenge.

Hughes did beat his previous best round on the tour, however, a 61 in the first round of the RSM Classic in November 2016. He went on to win that tournament in a five-way playoff after shooting a fourth-round 69 at Sea Island Golf Club.

Jim Furyk shot a 12-under 58 on the same par-70 TPC River Highlands course four years ago, the lowest score in a tour event.

"I kind of joked walking off there that 59 wasn't even the record because of Jim's 58," Hughes said. "It's probably not even that special around here. But as a personal milestone it would have been neat."

Hughes alluded to his previous best at the RSM Classic, saying that he learned a lot from that experience and how to carry the momentum into later rounds.

"Really the mentality tomorrow is to go out there and make a bunch of birdies again," said Hughes, who said he intended to have a brief afternoon round of practice before relaxing. "The golf course is kind of yielding some scores, and in order to be there on Sunday, I'll have to keep making birdies."

Hughes' bogey-free round included a 30-foot birdie putt on his second-to-last hole, the par-3 eighth. Patrick Cantlay also shot 60 at TPC River Highlands as an amateur in 2011.

McIlroy, who also started on the back nine, eagled the par-5 13th and followed that up with two straight birdies. He made four more birdies on the front nine for a 31.

"It's just been nice to get back into some competitive golf again," McIlroy said. "You know, it doesn't feel the same because you're not having thousands of people reacting to your birdies and getting that going. I felt the weekends have been a little flat for me just because that’s when you're in contention and that’s where you sort of start to feel it. Thursdays and Fridays don't feel that different to be honest, but into the weekends they do."

Mickelson learned earlier Thursday that he was granted an exemption into this year's U.S. Open for being in the top 70 in the world on March 15, when golf was shut down because of the coronavirus pandemic.

Hughes wore a facemask when approaching the podium for his virtual news conference, sitting in a chair that had been repeatedly wiped down by PGA Tour staff. Off-site media were given the opportunity to speak with Hughes through a videochat since in-person access to the event was so limited. He said that the protocols have been "top notch" and that all the other precautions didn't "feel that strange."

But he did miss having spectators.

"The absence of fans really hurts," said Hughes. "That would be a lot of fun to play a round like that with the gallery kind of getting into it, but the new normal is here, and we're all just going to try to adapt and do our best."

This report by The Canadian Press was first published June 25, 2020.

By John Chidley-Hill in Toronto