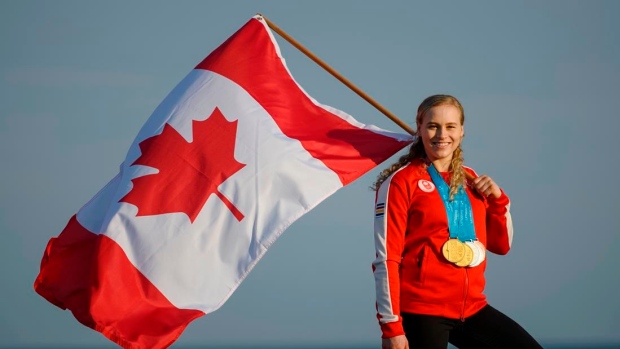 The postponement of the Tokyo Olympics to 2021 gave Canadian gymnast Ellie Black the gift of time.

The 24-year-old from Halifax tore an ankle ligament landing a vault during last October's world championship in Stuttgart, Germany. Black underwent surgery on her ankle later that month.

Canada's most decorated female gymnast intended to compete in Tokyo in July.

But a year's delay of the Summer Olympics because of the COVID-19 pandemic affords Black's ankle, not to mention the rest of her body, a period of unexpected restoration.

"This gives me an opportunity to allow my ankle to have a little bit longer to heal and hopefully be stronger, and hopefully my performance can be stronger for my team a year from now," Black told The Canadian Press.

"We are giving the ankle a little bit of time to rest and recover and avoid the things that irritate the ankle. Avoid some of the hard pounding.

"Being at home and training here is a chance for your body to rest a little bit, especially in gymnastics where it's such a high-impact sport."

She dropped from third to fourth in Stuttgart where she landed awkwardly on her final vault and limped off the mat.

Black was on a tight, but doable, timeline to recover and prep routines for Olympic competition.

In her first meet post-surgery, Black placed fifth in an American Cup in Milwaukee in March.

The Canadian's comeback was cut short, however, by the virus that brought the sports world to a halt.

"I wouldn't say we were pushing or rushing it," Black said. "Had it been a different year and a different timeline, maybe we would have extended the process a slight bit longer to allow extra healing and extra time and really prepare the routines before getting back into competition."

The two-time Olympian is in the same situation as other Canadian athletes with Tokyo now on a more distant horizon.

With her Halifax Alta Gymnastics Club closed during the pandemic, Black has pieced together a home-based training program.

In addition to riding a stationary bike and bounding up and down the sidewalk in front of her house with her dog Keiko, Black and her Canadian teammates regularly train together with a coach via video conferencing.

"The number one priority is trying to keep everyone healthy, safe and at home," Black said.

"We're doing a lot of Zoom meetings with my national teammates across the country, working on mental performance, still doing some strength training, Pilates, artistry, dance.

"We focus on facial expressions and the actual leg and arm positions. Some of them we're doing a ballet barre class, some of them are more strength and stretching.

"Especially for me with artistry, I don't get the chance to do a lot of that in my normal day-to-day training. Being able to have our national-team instructor and the girls with me, I really enjoy it. It would be hard for me to do that personally on my own.

"It's something that can definitely help my gymnastics grow."

"Our house, I don't have quite the space to do that," the gymnast said. "I think I'd be dragging my mattress from upstairs down to the living room and that wouldn't be good.

"I think it's important for us to do things that are safe with the equipment that we have."

This report by The Canadian Press was first published April 18, 2020.