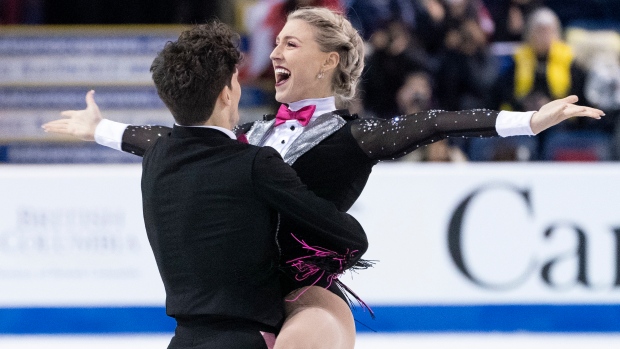 "It was a fairly solid skate for this time of the season," said Poirier. "It was a testament to the work we’ve put in to increase the speed and increase the confidence we skate with. Last year at Skate Canada we started off with a costly error so this year wanted to do better."

Americans Kaitlin Hawayek and Jean-Luc Baker are third at the second Grand Prix event of the season.

Hubbell and Donohue are coming off a win last week at Skate America in Las Vegas. They won bronze at last season's world championships and silver in 2018.

Gilles and Poirier were seventh at last season's worlds.

The two-time world champion from Russia, who is coached by Canadian Brian Orser, didn't land a double axel cleanly and fell on her final jump to stand sixth in the 12-woman field.

Gabrielle Daleman of Newmarket, Ont., is fifth, Montreal's Alicia Pineault is 11th and Veronik Mallet of Sept-Iles, Que., is 12th.

The men's and pairs short programs were scheduled for later Friday.

Free skates in all four disciplines are Saturday.

This report by The Canadian Press was first published Oct. 25, 2019.