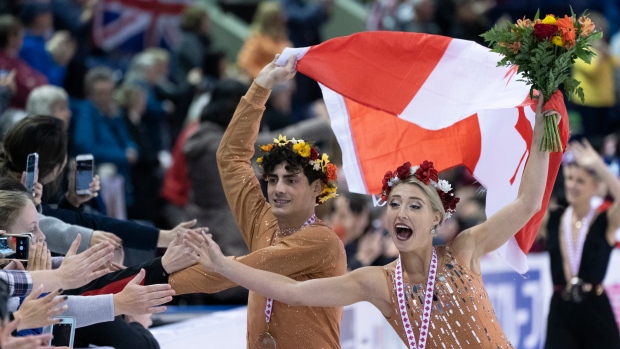 Gilles and Poirier set personal bests right across the board finishing with 209.01 points. The Toronto duo edged the defending Grand Prix Final champions Madison Hubbell and Zachary Donohue of the U.S. in second at 206.31, while Lilah Fear and Lewis Gibson of Britain were third at 195.35.

"This is such a special moment," said Poirier. "Our mentality every single day is to push ourselves in order to win. We felt really united this week and that gives us the confidence we need to skate our best."

In pairs, Aleksandra Boikova and Dmitrii Kozlovskii of Russia took the gold with 216.71 followed by Moore-Towers and Marinaro in second at 208.49. Evgenia Tarasova and Vladimir Morozov of Russia were third at 202.29.

"We've been training a lot better than that," said Moore-Towers, from St. Catharines, Ont. "We worked really hard on our jumps so there was some unforeseen mistakes and we're glad we didn't let them snowball. But it was probably our worst run of this program in six weeks."

Two-time Olympic champion Yuzuru Hanyu earned 322.59, less than a point from the world record, in the men's program for gold. Nguyen also set a personal best 262.77 and Keiji Tanaka of Japan was third at 250.02.