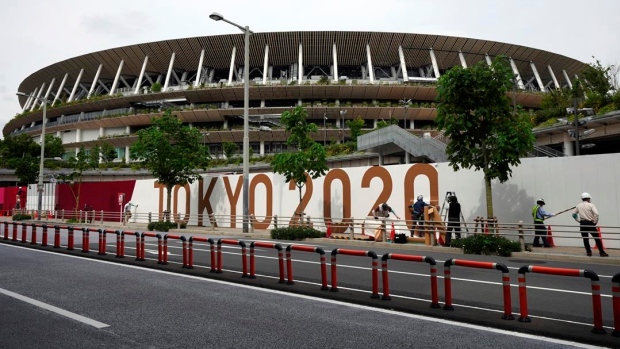 TORONTO — Canadian lawyer and long-standing IOC member Dick Pound says if there was a drop-dead date for cancelling or postponing the Tokyo Olympics, that day has passed.

Pound reiterated a comment he first made to the Evening Standard in an interview with The Canadian Press.

"Barring some Armageddon, of which nobody is aware, there's no indication of (cancellation). We are a go," he said.

With Tokyo under a COVID-19 state of emergency, there's a growing chorus of voices to cancel or postpone the Games, which open July 23. Several medical bodies have warned they could spread COVID-19 variants.

IOC president Thomas Bach, who was forced to scrap a trip to Tokyo a couple of weeks ago due to the city's state of emergency, predicted that least 80 per cent of residents in the athletes' village will have been vaccinated. About 15,000 Olympic and Paralympic athletes, plus added support staff, will live in a bubble in the village, training sites and venues.

That leaves potentially 3,000 people or more in the village unvaccinated.

Pound hopes every participant in the Games gets vaccinated.

"I think every effort is going to be made to get people vaccinated," Pound said. "Personally, I think you'd have to be out of your mind not to be vaccinated if you're going to a place that's not far from the epicentre (Wuhan, China)."

The IOC has said the Games will go ahead whether or not the state of emergency is still in effect. Participants aren't required to be vaccinated, although Pound suggested that might not be set in stone.

"I don't know whether they're thinking about it, but Japan could say, 'You can't come into Japan if you haven't been vaccinated,''" he said.

While vaccinations have been proven highly effective, they're not 100 per cent foolproof, said Dr. Barry Pakes of the University of Toronto's Dalla Lana School of Public Health.

"Just in Ontario, we've seen quite a few people who have been vaccinated who have become ill, and even a couple who have passed away, and we now have at least one significant outbreak of the Indian variant, the B.1.617.2. And so, the vaccine is incredible, 95 per cent if not more protective, but it's not 100 per cent.

"And when there are high levels of transmission, I wouldn't call them high in Japan now, but they certainly could be by the time of the Olympics, even those who are vaccinated are still going to be putting themselves in some degree of risk," Pakes said.

"And to me, this doesn't seem absolutely necessary — although reasonable people can differ about that," Pakes said.

Last week, the New England Journal of Medicine said the IOC's decision to hold the Olympics was "not informed by the best scientific evidence." The British Medical Journal, in an editorial in April, asked organizers to "reconsider" holding the Games.

Pakes said the possibility of a new variant in Tokyo is a concern and a "worst-case scenario."

The Canadian Olympic Committee (COC) said in a statement it's "very mindful of the apprehension caused by the pandemic." The COC adds it is confident the Games will be staged safely.

In addition to the IOC and Tokyo organizer protocols which have been detailed in the Tokyo 2020 Playbooks — the third and final version of which is expected to be released later this month — the COC has developed its own set of protocols.

The COC says it is reducing the size of its team in Japan, eliminating Canada Olympic House and rolling out vaccines that were recently secured by the IOC.

Pakes, whose background is in public health ethics, said his biggest concern is the impact the Olympics might have on "thousands of people who are going to have to be working, interacting with all kinds of other people in all kinds of various ways."

"But when you're doing something like preparing for an Olympic event, it's something different, it's going to be out of context, and it could be hard to keep the infection prevention control measures," he said. "So, I'm frankly more concerned about the impact on spread in Japan, and the people who are potentially working on the Olympics, than I am about the athletes themselves, or even their support staffs. Those people you can control and you can make all kinds of measures, and those are the high-profile pieces."

About 70 per cent of the population is not expected to be inoculated before the Games. Japan is vowing to soon start administering one million doses daily. It currently is giving about 500,000 per day

"It is certainly legitimate to say you cannot participate in these Games unless you are vaccinated," Pakes said. "That would be a minimum of something that would be really important to do.

"And . . . it's an incredibly important message to everyone around the entire world who's going to be paying attention to what's going on with the Olympics, that Olympians getting vaccinated, athletes who are very concerned about their health and performance and all of that. (That) would go a long way to combating vaccine hesitancy.

"It's pretty clear the Olympics are going ahead. But if we want to go ahead in a way that's actually going to contribute to combating the pandemic on a global scale, that is critically important for them to do and a really important message — and hopefully something positive that can come out of it."

Critics have said the IOC is barging ahead solely for financial reasons. Pound argued that's not the case.

"Everybody, every party that's involved in making something as huge as the Olympic Games happen run risk assessments as to what could go wrong, if you're a sponsor or supplier or a broadcaster, or whatever it may be ... you insure against the risks that are insurable. So, it's not a life or death financial issue for us," he said.

"And we've been saving for a rainy day for the last 10 or 12 years. If ever there has been a rainy day, this would be it."

Pound said Suga wouldn't go ahead with the Games if they weren't safe.

"What possible interest could the prime minister have in exposing Japanese and foreigners to increased risks because of the Games?" he asked. "There's none. If they think there is that kind of a risk, they'll say so and act accordingly. But they haven't. They've said 'We are satisfied on the basis of the best possible scientific advice available to us that we can do this without increased risk.'

"So let's carry on with our plan."