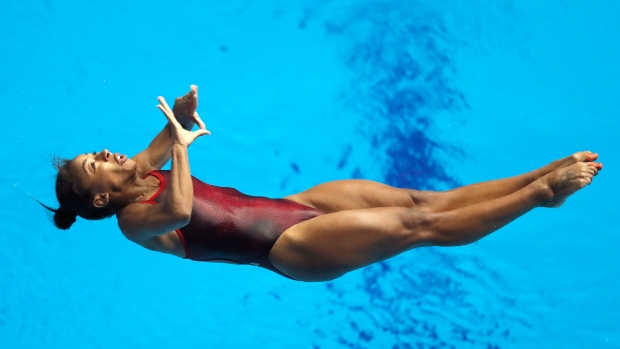 MONTREAL — Jennifer Abel added to her trophy case at the FINA Diving World Series on Sunday.

The 28-year-old, who had already won a gold medal with Melissa Citrini-Beaulieu in the women's three-metre synchro springboard earlier in the competition, came away with two more gold medals on the final day.

Abel prevailed in the women's three-metre springboard Sunday afternoon, then teamed up with Francois Imbeau-Dulac an hour later to win the mixed three-metre synchro.

A three-time Olympian, Abel led through all but one round of her individual competition, finishing over 40 points ahead of second-place Mariia Poliakova of Russia. Australian Anabelle Smith won bronze.

Abel said she relished the chance to perform well in Montreal in front of friends and family.

"For me, surprisingly, I always have good results when we compete at home," said Abel, who had a boisterous cheering section wearing t-shirts with "We Are Abel" inscribed on them. "I love having the crowd cheering for me but at the same time, it gives you a little bit of pressure because you don't want to miss in front of them."

She hinted at an injury hampering her ability to prepare for this weekend.

"I haven't had the training I would have liked," Ware said. "Now I'm feeling good. I'm feeling strong and I felt super good the whole day."

Abel and Imbeau-Dulac barely edged out Thomas Daley and Grace Reid of Britain en route to first place in the mixed event. The Mexican team of Dolores Hernandez and Osmar Olvera finished in third place.

Imbeau-Dulac, who called the gold with Abel a "beautiful fight," said he felt pressure affecting his performance this weekend.

Imbeau-Dulac didn't crack the top-three in the other two events he participated in.

"For me today, it was just a way of changing the scenario," he said. "They were five dives which I knew I could do, which is a positive end to the weekend."

Riendeau said he was impressed with Minibaev, whose final dive scored over 97 points.

"Minibaev, his last dive was really his best," Riendeau said. "Honestly it was close to perfect."

Nathan Zsombor-Murray, who at 16 years old was the youngest member of Canada's team, finished in sixth place in the final.

"It was my first World Series competing without someone by my side," he said. "I'm disappointed with my performance but overall I'm happy."

The Diving World Series, which normally features up to five meets, has been cut to three events this year due to the coronavirus. China, a diving power, did not compete this weekend.

Montreal was the first of three World Series events.