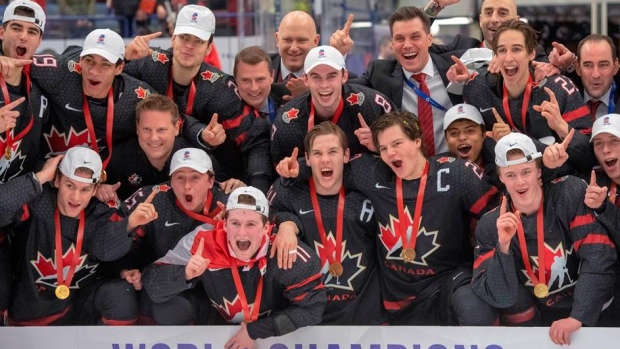 Akil Thomas felt like he was living in a movie. The script seemed predetermined and, as it would turn out, he had an unlikely starring role.

Canada trailed Russia 3-1 with 11 minutes left in the gold-medal game of the 2020 world junior hockey championship last January when a shot pinballed in off Connor McMichael to cut the deficit. Canadian captain Barrett Hayton, who suffered a separated shoulder in the semis and was a huge question mark for the final, then tied things moments later with a bullet shot on a power play.

That set the stage for Thomas — a forward used sparingly throughout the tournament in the Czech Republic, but handed one final shift by head coach Dale Hunter — to play hero on a breakaway that materialized out of almost nothing with 3:57 left in regulation.

The Russians, however, weren't done. They got a man advantage of their own, and with the goalie pulled, Aidan Dudas accidentally cleared the puck over the glass from the defensive zone, only to see it strike a remote television camera to avoid another penalty — some miraculous luck that spared Canada having to weather a 6-on-3 attack in the dying moments.

Russia imploded from there with two late penalties before Canada killed the clock and spilled onto the ice to celebrate its 18th gold medal at the under-20 tournament in front of a throng of travelling, rabid fans.

"It felt like everything that was happening was orchestrated beforehand," Thomas recalled nearly 12 months later. "How could you create a better story? It seemed like someone wrote a movie, and we just did it. It was nuts. I feel so in that moment to this day."

That group of peach-fuzzed teenagers, who overcame an early blowout loss, injuries, suspensions, controversy and illness, were rewarded a second time for their perseverance throughout a roller-coaster, edge-of-your-seat world juniors Wednesday by winning the team of the year award from The Canadian Press for 2020.

The squad secured 26 of 68 votes — 38.2 per cent — in a poll of writers, broadcasters and editors across the country. Canada's Olympic and Paralympic teams garnered 14 votes for their stance on postponing the Tokyo Games amid the widening COVID-19 pandemic, while the Toronto Raptors, who won the award in 2019 after securing the franchise's first NBA title, were third with 13 after finishing with the league's second-best record in the regular season.

It's the sixth time Canada's world junior outfit has earned team of the year honours, and the first since receiving back-to-back nods in 2008 and 2009.

"I think about it all the time," defenceman Bowen Byram said of the gold-medal game. "I wish I could go back to that moment. It's something you can't really explain to people that weren't part of the team.

"I get goosebumps thinking about it."

But thoughts of gold, or any other accolade, seemed unlikely to most outsiders after Canada's second game in gritty Ostrava.

After beating the United States in their opener, the Canadians were embarrassed 6-0 by Russia — the national program's worst-ever defeat at the event — on a disastrous night that also saw star winger Alexis Lafreniere suffer what looked like a serious knee injury.

To make matters worse, workhorse centre Joe Veleno was handed a one-game suspension for a dubious head-butting incident, while Hayton added to the drama by forgetting to remove his helmet for Russia's anthem.

Some teams might have crumbled. But not this one. Not this group.

"There were some big, ugly things that happened," said Mark Hunter, Dale's younger brother and Canada's general manager. "It didn't rattle them. They just kept playing."

Lafreniere missed two games with that injured knee — Canada's most talked about joint for a couple days — but returned to finish with four goals and 10 points in five outings to win MVP honours, while also dragging his team into the fight with inspired physicality not often seen among elite talent.

"Being focused on one goal was really big for us," said Lafreniere, who cemented his No. 1 overall NHL draft status at the tournament and was selected first by the New York Rangers in October. "We faced a lot of adversity and were able to come back stronger."

With the benefit of hindsight, players on the Canadian roster feel that horrendous early performance against Russia provided a necessary wake-up call.

"It fuelled us," Byram said. "You want to avoid those things as much as possible.

"But when you do go through something like that, you've just got to make sure you learn from it."

"You know you're going to face adversity," McMichael said. "But you don't know how it's going to be until you do.

"And we faced a lot of adversity."

After finishing a disappointing sixth in Vancouver in 2019, the Hunter brothers — who have dominated the Ontario Hockey League for the last two decades with the London Knights, but had taken part in just one under-18 event with Hockey Canada — were tasked with restoring the country's pride at the showcase tournament.

In the wake of that Russia debacle, however, it was probably a good thing an ocean separated the Canadian contingent from the vast majority of their supporters.

"Somebody called me and said, 'You two guys are just getting buried on social media. (The Hunters) are overrated, they don't know what they're doing,'" Mark Hunter recounted. "I go to Dale, 'Hey did you see this? They sure turn on you pretty quickly.'

"But that's part of the business. It's about having experience and not overreacting."

Canada took a deep breath and recalibrated, beating Germany and thumping the Czechs to finish atop its group. Lafreniere returned to lead the charge in a 6-1 whitewash of Slovakia in the quarterfinals — Nolan Foote got the early boot for an illegal check to the head to provide another bump in the road — and a 5-0 defeat of Finland in the semis minus a flu-ridden Byram, setting up the Russian rematch that once again didn't start according to plan.

"Even after we went down 3-1 in the final, I had a feeling we weren't going to lose," Byram said. "That's the feeling we had the whole tournament."

And following the goals by McMichael and Hayton, who couldn't lift his arm over his head because of that bum shoulder, Thomas found himself almost improbably on centre stage, poking a loose puck past a defender, moving in alone and burying a backhand to send the travelling Canadian support inside Ostravar Arena into a chaotic, spine-tingling frenzy.

But the 2018 second-round pick of the Los Angeles Kings said if it wasn't for the positive mentality he forced on himself — players of his calibre aren't used to sitting — things could have played out much differently.

"The hardest thing I've ever had to overcome in my career," Thomas said of waiting for a chance he knew might not come. "Maybe in the back of my head I was thinking: 'I'm doing this for no reason, I'm not going to get a shot.' But I just tried to block the negative thoughts out.

"If Dale saw me on the bench slouched over and I had negative body language, it's not an appealing sight and he probably wouldn't have picked me. The fact that I was ready to go, positive, didn't care about the past, just wanted to look forward, it taught me a lesson I can use in any situation."

And that moment the puck crossed the line?

"I can't really explain how I felt because it was an accumulation of so many different things," he said. "When I watch that goal, I feel how I felt during that game ... just so surreal.

"It honestly feels like I did that just a minute ago."

A dramatic plot twist — one of many — Thomas, his teammates and Canadian hockey fans won't soon forget.