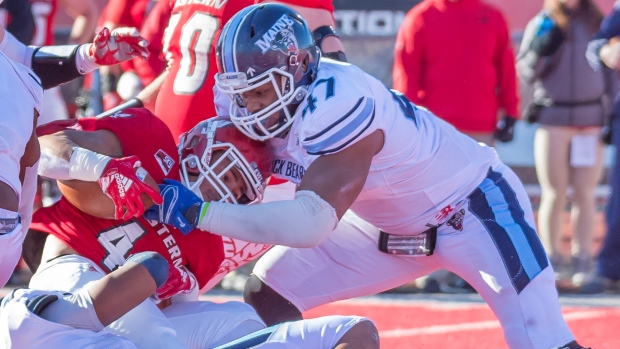 He's on the lookout for a new school but Deshawn Stevens isn't closing the door on playing in the CFL this year.

The six-foot-two, 255-pound linebacker is currently in the NCAA transfer portal following five years at Maine. Ideally, the Toronto native wants to attend a bigger school and improve his prospects for the 2022 NFL draft.

But Stevens is also a top-rated player for the '21 CFL draft Tuesday night and said if the NCAA transfer process doesn't pan out, he'd play football in Canada rather than return to Maine.

Stevens was ranked No. 20 on the CFL scouting bureau's final top-20 prospects list for the draft.

"It's been a great five years (at Maine)," Stevens said during a recent video conference. "For me, it's about my career and using the time I have left to try and pursue a high level of football.

It just gives me a better opportunity down the line for pursuing the NFL."

Stevens enjoyed a stellar 2018 season when he registered 120 tackles (17 for a loss), nine sacks, two fumble recoveries. He was named Maine's top defensive player and helped the school capture a CAA title.

But Stevens suffered a season-ending torn Achilles tendon in Maine's 2019 opener before the Black Bears postponed the 2020 season due to the COVID-19 pandemic. Stevens finally retuned to action March 6 when the school kicked off an abbreviated schedule, finishing 2-2.

Stevens had a team-high 36 tackles this spring for Maine.

"We interviewed him and he's a serious young man," Winnipeg general manager Kyle Walters said. "He's a big, thick, traditional American linebacker that can come downhill and he can strike.

"He can stone offensive linemen and can strike running backs. When he gets that big frame moving he can cover some ground too. He's a good football player."

And Walters understands Stevens' decision to enter the transfer portal.

"He loves football, takes it serious, he's got a plan for what he wants to do," Walters said. "Like most kids going back to school, they would like an opportunity to see if there's NFL interest a year from now and you can't blame them for that."

Athletes are creatures of habit, with the vast majority craving continuity. Stevens admits while there's plenty of uncertainty in his life currently, he's rolling with it.

"It's part of the process," he said. "However, the thing that doesn't change is the work I have to put in every single day.

"I can only control what I can control and every day that's, 'How do I get better,' whether it's on the football field, physically, mentally . . . how I put myself together as a complete athlete or as a person. Whenever the opportunity does present itself, I can make sure I'm ready to be ready to go right from the start."

Stevens is the second Canadian at Maine to enter the transfer portal this off-season. Liam Dobson, a six-foot-three, 340-pound offensive lineman from Ottawa, recently transferred to Texas State.

Dobson finished ranked No. 12 on the final CFL scouting bureau.

"My name is in the portal so I'm waiting to see what opportunities are presented to me," Stevens said. "I feel like life is too short not to pursue the dreams you want and I'm in that situation now."

On Tuesday night, Stevens could be taken by the Toronto Argonauts, the team he often watched play at Rogers Centre. Stevens also volunteered at the 100th Grey Cup game played there in 2012, which saw the Argos capture a 35-22 win over the Calgary Stampeders before over 53,000 spectators.

"You don’t forget those moments," he said. "Like this is what I can really obtain and pursue in my mind, whether it’s here in Canada or elsewhere.

"I want to go for it. This is all I’ve been blessed with and I’m lucky enough to really get to see for myself. That’s what I don’t want to take for granted.”"

This report by The Canadian Press was first published May 3, 2021.

Note to readers: This is a corrected story. A previous version incorrectly referred to Maine's varsity team as the "Golden Bears."