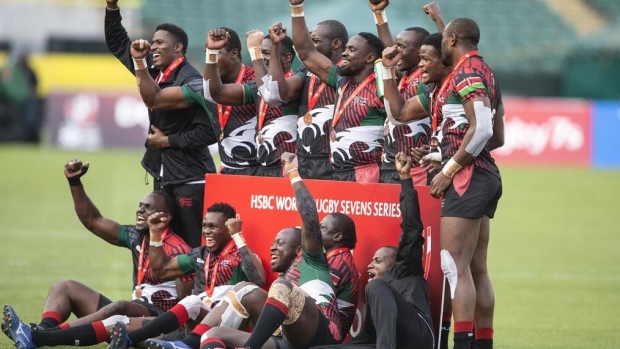 EDMONTON — The Canadian men lost 33-14 to Kenya in the bronze-medal match Sunday on Day 2 of the HSBC Canada Sevens at Commonwealth Stadium, while the Canadian women won bronze in their four-team competition.

On the women’s side, the Canadians easily defeated Mexico 63-5 on tries from nine different players in the bronze-medal match.

Canada lost 22-12 to the Americans in the Cup semifinal after going down 12-0 at halftime.

Britain defeated the U.S. 22-5 to claim the Fast Four title.

The Canadian men were playing for bronze after losing 22-12 to Britain in the Cup semifinal earlier.

Canada, which finished sixth last week in Vancouver, began Day 2 in Edmonton with a 14-12 victory over Ireland in the quarterfinal. Josiah Morra scored two tries and Prevost added two conversions.

Germany, an invited team, defeated the United States 24-17 in the fifth-place playoff. The U.S. went unbeaten Saturday to win Pool B ahead of Kenya in second place.

Canada finished second in Pool A on Saturday with a 2-1 record. The men defeated Hong Kong and Mexico before being routed by eventual winners South Africa.

The tournament in Edmonton was part of the second half of a truncated 2021 campaign due to the pandemic. The 2022 season will kick off in late November in Dubai.

Only seven of the men's core teams took part in the Canadian events with New Zealand, Fiji, Australia, Argentina, Japan, France and Samoa among those missing due to pandemic-related travel restrictions.

This report by The Canadian Press was first published Sept. 26, 2021.