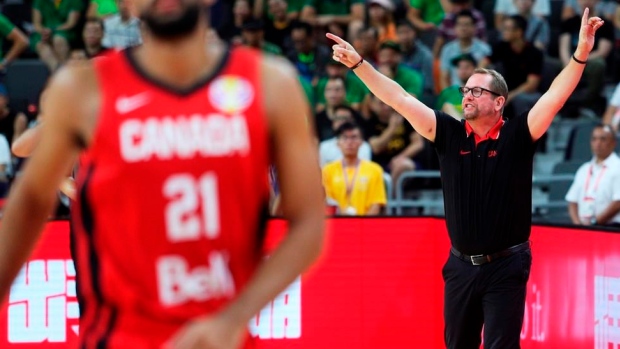 Hosting an Olympic qualifying tournament for men's basketball was simply too good an opportunity for Glen Grunwald to pass up.

The Canada Basketball CEO thinks it's a win-win situation as it was announced on Friday that the nation's men's team will play its Olympic qualifying tournament in Victoria in June. Canada must win the six-team tournament, June 23-28, to earn a berth for the 2020 Tokyo Olympics. The draw will be Nov. 27.

"To be able to play in front of our own fans is always exciting and gives our team a home-court advantage," said Grunwald from Edmonton, where Canada's women's team is hosting an Olympic qualifying tournament this week. "Secondly, it's an opportunity to not have to play some of the better teams in Europe on their home court. Then in terms of travel it's less wear and tear on our players and staff.

"Also, the opportunity to grow basketball in this country. Our intention is to leave a great legacy behind in Victoria, the greater Victoria area, and in B.C., both for basketball and for infrastructure."

As the host country, Japan automatically qualified for the 2020 Games. Seven countries qualified for Tokyo at the FIBA World Cup in China, but missing most of its stars, the Canadian team finished 21st there.

Recruiting NBA players to play internationally has often been a problem for Canada. Although there were 16 Canadians on opening-day rosters in the NBA this season — second only to the United States — Sacramento's Cory Joseph and Orlando's Khem Birch were the only NBAers who played for Canada at the World Cup in September.

Grunwald believes that having the qualifying tournament on home soil will help Canada recruit more of its elite players.

At least one Canadian appears to be willing to suit up for the qualifying tournament.

"I plan on being there, I plan on playing regardless of if I get a contract or whatever happens," Memphis forward Dillon Brooks told the NBA's website. "I'm going to play for Team Canada because you know I missed out this year and I really want to play and make it to the Olympics.

"It's something in my basketball career that I want to do — wear that red and white. It's going to be a special year for us in Canada."

The six teams in Victoria will be divided into two groups of three with each playing all the other teams in its own group. The top two teams in each group will play in the semifinals. The two semifinal winners will advance to the final, with the winner earning a trip to Tokyo.

An unnamed donor contributed financially to Canada's bid for the event that will be held at Victoria's Save-On-Foods Memorial Centre. Grunwald says the entire community made hosting the tournament possible.

"Victoria was able to free up the dates in their arena, which was a key thing, and then they put together a very attractive package through some great benefactors in the Victoria area," said Grunwald. "To be able to host a first-class event there, to make the investment that's necessary, is critical."

Another factor was the proud history Victoria has with basketball. The University of Victoria Vikes have long been one of the most dominant collegiate programs in Canada, producing high-calibre players and coaches for decades. Current UVic athletics director Clint Hamilton was also instrumental in Canada's bid for the Olympic qualifying tournament.

Croatia, Lithuania, and Serbia were also announced as tournament hosts on Thursday.