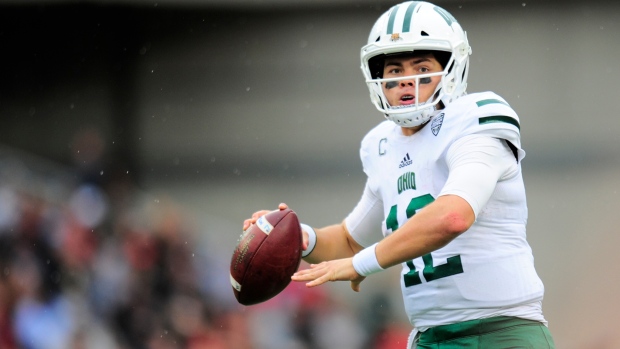 Canadian quarterback Nathan Rourke, who starred at the NCAA level for Ohio and was drafted by the BC Lions in 2020, has accepted an invite to New York Giants rookie mini-camp, TSN's Farhan Lalji has confirmed.

Although Giants general manager Kevin Abrams has shown a tendency in the past to hand out mini-camps invitations to Canadian players, Lalji notes that Rourke has a legit opportunity and should get a long evaluation as NFL teams are currently restricted to just five mini-camp invites due to COVID-19 protocols. Under normal circumstances, teams would be allotted 25 to 30 invites.

After starring at Ohio for three seasons (2017-19), Rourke, who hails from Oakville, Ont., went unselected in the 2020 NFL Draft. He was ultimately selected in the second round (15th overall) by the BC Lions.

Due to the ongoing coronavirus pandemic, the CFL cancelled its 2020 season. Rourke still has his entry level deal with Lions waiting for him.

Rourke amassed 7,313 passing yards and 60 touchdowns against 20 interceptions at Ohio. He also rushed for 2,552 yards and 48 touchdowns.

News of Rourke's rookie mini-camp opportunity with the Giants was first reported by 3DownNation's Justin Dunk.