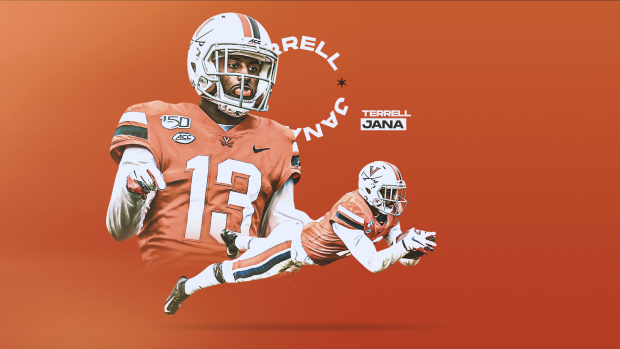 For Canadian receiver Terrell Jana, it was a visit to the enslaved labourers memorial at the University of Virginia that led him to re-examine his outlook on the university and who he is there.

That profound impact on his outlook led to his decision to not have his last name on the back of his Cavaliers football jersey. While visiting the memorial, he noticed many of the people did not have last names.

“My idea of not having the name on the back of my jersey was to pay homage to those people and to say thank you,” Jana told TSN’s Farhan Lalji in a one-on-one interview.

“My family means the world to me so just thinking about not having a last name, not having that connection to a family, to history, to tradition, to culture and that being taken away from you, it kind of broke my heart.”

Ranked as the third overall prospect and top receiver in the fall CFL scouting rankings, the 20-year-old Jana says his decision to removing his name from the back of his jersey has been well received and believes that the community of Charlottesville has embraced it.

He also shares that when he visited the memorial, he met a direct descendent of one of the enslaved labourers who worked at the University of Virginia, and who helped in the process of building the memorial.

“She showed gratitude and appreciation for bringing some awareness to the memorial, shining some light on it,” said Jana. “Sharing that moment with her was pretty remarkable because just seeing that someone who was a direct descendent, someone who had an impact on it being built and appreciate what I was doing was an amazing moment for me.”

On the field, Jana had a breakout season last year where he was second on the team in receiving. Now a senior and one of the four captains, the Vancouver, B.C. native expects a lot more of himself as the Cavaliers have struggled out of the gate with a 1-4 record.

“The team needs more out of me, production wise and leadership wise, stepping in trying to get the best out of my teammates,” said Jana. “There’s definitely a lot more I can do. That’s speaking to us as the captains, as leaders of the team what more can we do on and off the field to get the best out of our teammates, ourselves and make the most out of the season. When you start off the season like this, there’s almost nothing you can really be happy about.”

Despite the lack of team success, Jana has had a solid start to the season, including five catches for 55 yards and a TD against No. 1 ranked Clemson on Oct. 3 and is again the second-leading receiver on the team.

He is one of several Canadian receivers making headlines this season in the NCAA with John Metchie, Josh Palmer and Jared Wayne excelling and Ajou Ajou getting playing time with Clemson.

However, leading the pack of Canadian football players making their mark is Pittsburgh Steelers rookie Chase Claypool. Claypool has rushed 333 yards with four TDs for the 5-0 Steelers, including a three-touchdown performance against the Philadelphia Eagles on Oct. 11.

Jana and Claypool grew up playing basketball together in British Columbia, with Claypool spending a summer with Jana’s family when they were playing at the under-15 nationals for Team B.C.

“I’m super happy for him,” said Jana on Claypool’s success. “It’s well deserved. When it comes to an athlete, he’s an incredible athlete, incredible person. It’s awesome, he’s a freak athlete so the success he’s having right now is no surprise. But I’m super excited for him, he’s going to have an amazing career there in the NFL.”

Jana also has his eyes on playing professional football when his college career ends and hopes this is just the beginning for himself and other Canadian football players.