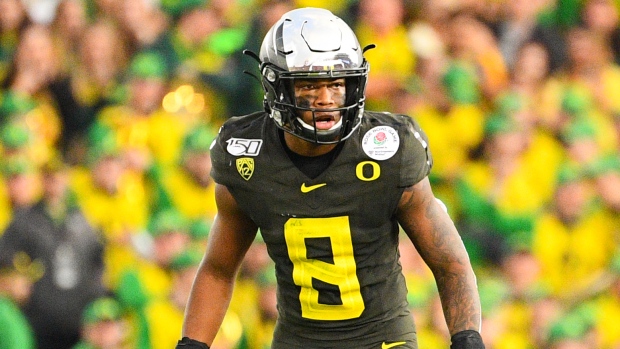 After having to sit through the entire opening round of the NFL draft without hearing his name, Canadian Jevon Holland didn't have to wait long to get the call Friday night.

The Miami Dolphins selected Holland with the fourth pick of the second round, No. 36 overall. That gave the native of Coquitlam, B.C., the distinction of being the first Canadian drafted.

"Last night, I was a little tossing and turning but I had a good night sleep," Holland said during a Dolphins zoom call. "I woke up (Friday) morning and went and worked out, then I sat down and was ready (to hear) my name called.

Two Canadians were taken in the third round.

As an early second-round selection, Holland can expect to sign a four-year deal roughly worth US$8.7 million with a signing bonus of about $3.7 million.

But Holland was surprised to be taken by the Dolphins.

More Canadians are expected to follow. Another three have garnered much NFL interest and if all six are indeed drafted that would be the most ever as the record currently stands at four Canucks set in 2014.

"I love being able to represent the Canadian people," Holland said. "I'm blessed to be in this position representing that many people.

Holland joins a Miami club that finished second in the AFC East last year with a 10-6 record.

Holland was the second defensive back taken in the second round, but first safety in the draft. Five cornerbacks were selected in the opening round Thursday night.

Holland, a six-foot, 207-pound junior, opted out of the 2020 season at Oregon to prepare for the 2021 NFL draft. Holland said many teams asked him about that decision and he didn't shy away from answering their queries.

"Everybody wanted to know and so I was honest about it," he said. "That's the only thing I could be and we just went from there."

Holland registered 66 tackles, including 4.5 for a loss, and four interceptions in 14 games for Oregon in 2019. He appeared in 27 career contests with the Ducks, accumulating 108 tackles and nine interceptions.

"I feel like I have a good sense of how the ball trajectory is going to be in the sky and things like that," he said. "I definitely think that added to my ball skills and ball-hawking ability."

Holland also offers versatility in that he can also play cornerback and return punts.

On Thursday, Miami selected Alabama receiver Jaylen Waddle with the sixth-overall pick. In addition to being a dynamic pass catcher, Waddle was also a dangerous returner for the national-champion Tide.

"Jaylen, that's my home boy, he's a hell of a player," Holland said. "I'm excited to be a Dolphin with him.

"I'm just looking to be on the field with him and all my other teammates. Whatever the coaches want, man, I'm down to do."

Holland was invited to this year's NFL combine, but the league eliminated in-person workouts due to the COVID-19 pandemic.

"My dad and brother both played football," Holland said. "It's really just me trying to follow in their footsteps.

"And then . . . kind of adapting a passion for myself and I ended up falling in love more with the game at that point."

Holland was among 45 players who confirmed to participate virtually in the draft.