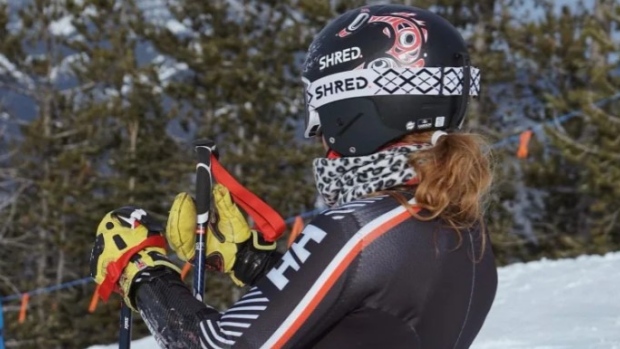 Gray, from Invermere, B.C., grew up learning about local First Nations peoples in school. Ahead of the 2021-22 World Cup season Gray decided to honour them by reaching out to the Shuswap band and asking them to connect her with an artist to design her helmet.

"It didn't hit me how much people missed out on (an education about First Nations people) across the country until I left Invermere and realized it wasn't as present in other places," said Gray. "I think I was really lucky to get all this experience and get all this knowledge at a young age, because it's really normal to me.

"I want to bring that into a community, which is alpine skiing, that doesn't have as much representation."

The Shuswap Indian Band put Gray in touch with Cote, who Gray had already met through her sister.

"It's a small town, everybody knows everybody," Gray said.

Cote then set about creating a design that paid tribute to the Shuswap but also drew on elements of the Every Child Matters movement.

"It is a massive honour and I also think it'll help bring awareness, especially to people who don't know much about First Nation bands or the trauma of residential schools," said the 17-year-old Cote. "It's super, super important to me, because I actually had a close family member who endured the residential schools.

Gray has worn the helmet throughout the 2021-22 World Cup season, competing in giant slalom and Super-G events in places like France and Austria.

Alpine Canada will announce on Thursday its team for the upcoming Beijing Olympics, where Gray hopes to compete.

Cote is rooting for her friend to compete at the Winter Games and eager to see the helmet she designed on sports' biggest stage.

"I've always been proud of being First Nations," said Cote. "Also growing up in my valley, I'm really proud to share my Indigenous history."

Cote drew her design on an iPad, with the file then printed off as a decal which Gray had affixed to her helmet.

Cote made the salmon orange to honour the thousands of children who experienced trauma in Canada's residential schools.

Including a salmon in the helmet's motif was about more than symbolism for Cote and the Shuswap. It's an ongoing political issue in the region.

Mark Thomas, who is on the Shuswap's band council, said that restoring salmon to the Columbia River is a critical part of reconciliation for local First Nations. The Secwépemc, Ktunaxa, and Niitsitapi have been in a nearly century-long fight with different levels of government to restore the fish to area waterways.

"That, I think, was (Cote's) intent, to draw that attention to some of the losses that we've had as a community in terms of salmon, and what it has done to us as a people," said Thomas. "I'm so proud that she's done that and been able to express herself in that form and to draw light to the plight of what we've been doing for the last 80 years, since we've lost our salmon."

Gray said that she is "really proud" of Cote's work and she appreciates all the thought the artist put into the work.

"Everything that she put in there, there's a meaning behind it," said Gray. "It's cool that I get to wear this on my head all the time and represent people that don't get the representation they deserve in the alpine skiing community."

This report by The Canadian Press was first published Jan. 19, 2022.

Note to readers: This is a corrected story. A previous version incorrectly identified Cassidy Gray instead of Trinda Cote in a photo cutline.