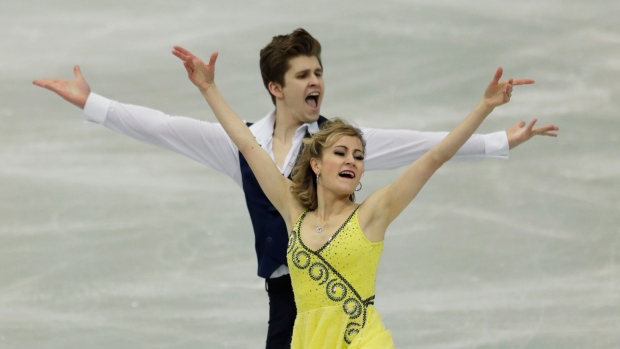 OSAKA, Japan — Canada's figure skating team is at the bottom of the standings after the first day of the six-team ISU World Team Trophy.

The Canadians, who are competing in their first live event in a season ravaged by COVID-19, scored 23 points on the first of three competition days on Thursday. They're two points behind Italy, and four back of fourth-place France.

Russia leads the way with 49 points. The United States has 47 points for second, while Japan is third with 42.

Canada sent different skaters to Osaka than the team that competed at last month's world championships in Stockholm. This is the first live event this season for these Canadian skaters after both Skate Canada International and the Canadian championships were cancelled. Skate Canada Challenge was held virtually.

The team event sees skaters in all four disciplines — men's and women's singles, pairs and ice dance — complete both their short and long programs. The placings of each skater are tallied to determine the winner.

Carolane Soucisse of Montreal and Shane Firus of North Vancouver, B.C., were sixth in the rhythm dance (65.06). World championships Victoria Sinitsina and Nikita Katsalapov of Russia lead with 86.66.

Alison Schumacher of Tecumseh, Ont., is ninth in the women's singles (59.19), while two-time national champion Gabrielle Daleman is 10th (57.22).

Russians hold down the top two spots. Anna Shcherbakova has the lead ahead of Elizveta Tuktamysheva. Canada won gold in the team event at the 2018 Pyeongchang Olympics, and silver in 2014 in Sochi, Russia. Their last medal at the World Team Trophy was a silver in 2013.

This report by The Canadian Press was first published April 15, 2021.