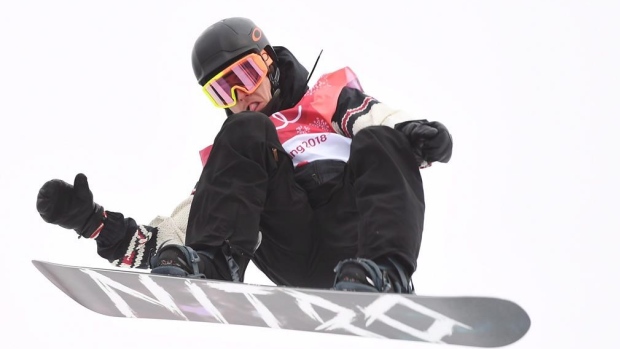 CALGARY — Canadian snowboarder Sebastien Toutant laid down two terrific runs to ride to gold at the men's Snowboard Slopestyle World Cup on Saturday, before freestyle skier Brendan Mackay did the same in the men’s Freeski Halfpipe for a repeat performance.

Incorporating a new trick rarely attempted, the reigning Olympic Big Air champion Toutant made a statement ahead of next month's Beijing Games: he's also a medal threat in slopestyle.

"The Olympics are coming up really quick and every result is really important for me right now," Toutant said. "To come up with the win today, it feels so special, especially to snowboard in Canada. We don't get to compete in Canada that much. So, yeah, today was a good day."

Laurie Blouin of Stoneham, Que., was third in the women's event.

Mackay scored 93.40 on his first run in windy, snowy conditions at the WinSport venue. The 24-year-old also managed a 93.20 on his final run for the two best results of the evening.

“The wind made things pretty difficult, but I’m used to riding the halfpipe here in Calgary. I gave it my all on each run."

Fellow Calgarian Noah Bowman was third with 88.00 on his second run after settling for fourth on Thursday. American Alex Ferreira was second (90.40).

“I’m really happy with my day," Bowman said. "The conditions were pretty extreme but I was able to pull it off. It was great to be able to get up onto the podium with Brendan, who was excellent."

Rachael Karker of Guelph, Ont., upgraded her bronze medal from Thursday by finishing second on Saturday in the women’s Freeski Halfpipe. Karker’s first run was her best, scoring 89.40.

“I was lucky enough to get some really high jumps in when there wasn’t much wind," she said. "The conditions deteriorated afterwards, so I couldn’t execute my biggest tricks. Still I’m happy to have improved on my ranking from Thursday.”

"Pretty hyped because the run I did, it's not like a typical slopestyle run you would normally see, especially on the jump," Toutant explained. "On the second jump, I spun off the heel, backside-12. It's a slower rotation than other people but spinning back side off the heel is super technical, like almost no riders actually do it."

It took a while for the score to come through as the judges deliberated. The wait was worth it.

"I'm glad I put it together. It's the first time I did this trick in a slope run," Toutant said. "I'm stoked to finally do a run that's different and that the judges reward me for that."

Toutant was the third-last rider to go in the 16-person men's final and his excitement was evident as he arrived at the finish with a flourish, sending a giant wall of snow onto his fellow competitors as they sat on hay bales at the bottom of the course, in the event aptly named Snow Rodeo. The top three finishers also received a white Stetson.

"I was just so excited and I was coming with a lot of speed -- brake and spray all the boys," Toutant said with a laugh.

With just over a month to go until the Olympics, Toutant will spend the next few weeks refining his new trick.

"Maybe I'll add a little flavour to it,” he said. "I'm going to Mammoth (Colorado) after this. So hopefully get another solid result there to lock my spot. But after that, I'm going to use this time to just train and practice a trick that I really want to do in Beijing."

Norway's Mons Roisland fell on his first run but laid down a great second run to finish second with 84.50. American Luke Winkelmann was third with 83.20. Regina's Mark McMorris just missed the podium, finishing fourth with 81.96. Cameron Spalding of Peterborough, Ont., was ninth.

Japanese athletes took the top two spots on the women's podium with Kokomo Murase (77.58) edging teammate Miyabi Onitsuka (77.18). Blouin, who won silver in slopestyle at the 2018 Pyeongchang Olympics, came up with a clutch second run to hit the podium with 75.73 after a crash on a landing on her first run.

"I'm just glad that I put it down when it counts," said Blouin, the only Canadian in the eight-woman final. "I did a little mistake but I'm glad I'm on the podium on home soil. It's not the run I really wanted because of that little mistake, but I'm still happy that it got me third."

The 17-year-old Murase, who claimed her first slopestyle gold, said she's excited about how she's progressing with the Olympics upcoming.

"Step by step," Murase said with a smile.