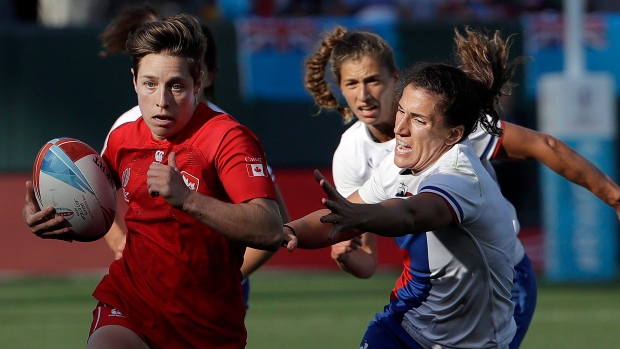 Canada lost 24-7 to host New Zealand in the women's final. The Canadian men, who missed out on the Cup semifinals on point differential, defeated the U.S. 28-7 in the fifth-place playoff for its best performance of the season.

New Zealand won the men's final, downing France 27-5 in a game that saw two French players sent to the sin-bin. The title was New Zealand's 60th in series history and 10th on home soil. The All Blacks lead the HSBC World Rugby Sevens Series standings, having also won in Cape Town and finished runner-up in Dubai.

Australia beat England 33-21 for third place in the men's tournament.

The Canadian attacked for most of the first half with Britt Benn crashing over for the first try after New Zealand was penalized in its handling of a probing Canadian grubber kick. New Zealand's Ruby Tui was sin-binned on the scoring play for a high tackle.

New Zealand came on strong as the half wore down and Michaela Blyde crossed the line to tie the game at 7-7 at the break.

Blyde gave New Zealand a 12-7 lead, slicing through the Canadian defence. Niall Williams and Stacey Fluhler scored late tries to make it 24-7. Fluhler become the first player to score 10 tries in a tournament since teammate Portia Woodman did it in Glendale, Colo., in October 2018.

"This is massive. To everyone who has supported us over the last couple of days, thank you very much. We love all of our fans here in New Zealand,"

"It was the heart and grit that got us over the line, we've been training for this for so long to be playing in New Zealand," said captain Sarah Hirini." Canada are amazing but the way that the girls fought to get the ball back in — obviously we've got some speedsters to score us some tries as well."

New Zealand leads the Series standings with 76 points midway through the eight-event season, having also won in Dubai and Cape Town after a third-place finish in Glendale.

Australia, which finished fourth, stands second with 64 points. Canada moved up one place to third with 62 points, two ahead of the U.S. France, which placed third, stands fifth with 56 points.

Canada's Kayla Moleschi and Benn made the tournament Dream Team.

On the men's side, Canada managed to win two of its pool matches but failed to advance to the medal bracket due to points differential. France moved on to the final four ahead of Canada.

The Canadian men closed out the tournament on a positive note, running up a 21-0 halftime lead over the Americans in the fifth-place playoff. Theo Sauder, Lucas Hammond, Pat Kay and Phil Berna scored tries for Canada with Kay adding four conversions.

The performance moved Canada from 12th to ninth in the standings after three tournaments.

The teams head next to Sydney, Australia, for next weekend's tournament.

This report by The Canadian Press was first published Jan. 26, 2020.