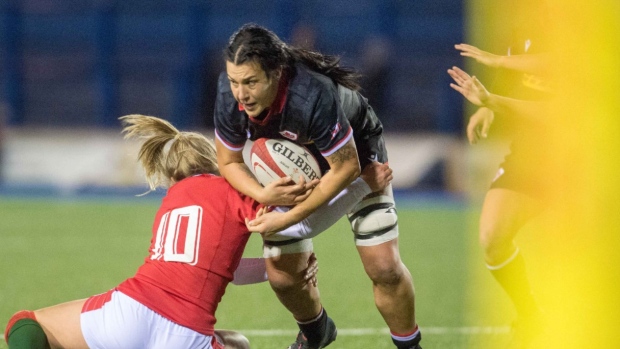 The victory came despite an early yellow card and losing captain Olivia DeMerchant to a red card in the 34th minute for a shoulder charge to the head in tackling Welsh flanker Bethan Lewis.

Carys Phillips scored a try for Wales with Elinor Snowsill adding the conversion.

“I’m very impressed with the resiliency our players showed in today’s win," said Canada's coach Sandro Fiorino. “They overcame a red card and really dictated play in the second half. I’m happy we were able to end this run of fixtures with a positive result."

The third-ranked Canadian women were coming off a 51-12 loss to top-ranked England last Sunday in London.

Canada, returning to action for the first time in almost two years, beat the sixth-ranked U.S. 15-9 and 26-13 earlier this month in Glendale, Colo., to win the inaugural World Rugby Pacific Four Series title.

The French margin of victory meant Canada will drop to No. 4 in the next rankings with France moving up a notch.

Canada improved its career record against Wales to 8-2-2. The Canadians have won the last five matches between the two, dating back to a 16-11 loss in May 2006 in Cardiff.

Canada played Wales twice at the 2017 World Cup, winning 15-0 in pool play followed by a 52-0 triumph in the fifth-place semifinal.

The Canadians started well Sunday and drove deep into the Welsh end, only to see the attack end in a handling error.

Wales came back, helped by a string of Canadian penalties and Phillips, at the back of the driving maul, crossed the line in the 10th minute. Canada's Tyson Beukeboom was in the sin bin at the time after receiving a yellow card.

This report by The Canadian Press was first published Nov. 21, 2021