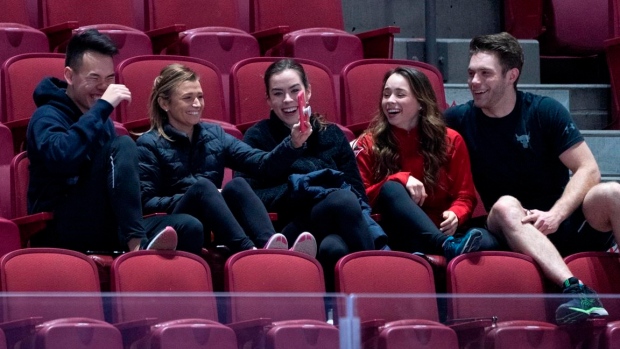 Upcoming world championships in Canadian cities have so far avoided cancellation, but the new coronavirus continues to lay waste to other sporting events around the world and impact Canadian athletes.

This month's world figure skating championship in Montreal, women's curling in Prince George, B.C., and women's hockey in Halifax and Truro, N.S., still have the green light for now.

The COVID-19 virus has been reported in more than 60 countries, has infected over 80,000 people and caused almost 3,000 deaths, according to The Associated Press.

The International Ice Hockey Federation confirmed Monday the women's world championship March 31 to April 10 in Nova Scotia will proceed while it cancelled six lower-tiered championships in March "due to the coronavirus situation."

"All other ISU Events for the season 2019-20 remain scheduled as planned," the ISU said on its website, so the figure skating championship March 16-22 at the Bell Centre is so far unscathed.

The ISU may still hold the short-track event in 2020, but not before October.

The 10 Canadian speedskaters led by multi-Olympic medallist Kim Boutin, who would have raced in Seoul, are in limbo as to whether they'll compete in a world championship this year.

"While the cancellation of this season's most important short-track competition is disappointing for our team, we believe the ISU made the right decision, one that protects the health and well-being of all participants, including the skaters," Speed Skating Canada said in a statement.

"Currently, the World Health Organization does not recommend any travel or trade restrictions that would impact on our events," the World Curling Federation said in a statement.

"At this time, all World Curling Federation events will go ahead, and qualified member associations will compete."

The IIHF axed men's Division 2-4 under-18 tournaments in Estonia, Bulgaria, Turkey and Luxembourg, as well as Division 1 and 2 women's championships in Poland and Spain.

Canada is entered in the men's world championship May 8-24 in Switzerland and top-level men's under-18 tournament April 16-26 in Michigan.

"The 2020 IIHF Ice Hockey Women's World Championship, and all subsequent championships to be played in April and May 2020 remain on schedule while the IIHF continues to monitor the situation," the IIHF said on its website.

An IIHF spokesman told The Canadian Press in an email Monday no country has indicated it will drop out of Canada's 10-country women's tournament because of coronavirus fears.

The 2003 women's hockey championship in Beijing was cancelled because of an outbreak of severe acute respiratory syndrome (SARS) that originated in southern China.

The world governing body of skiing will decide Friday on the status of the alpine World Cup finals March 16-33 in Cortina, Italy.

Meanwhile, the Canadian Football League has invited 24 international players to its national combine March 26-28 in Toronto.

"In anticipation of this event, we are closely monitoring the international coronavirus situation," the league said in an email.

"Young athletes in peak condition are, of course, not among the groups said to be at the highest risk.

"But as their health and safety, and the health and safety of all combine attendees, is of paramount importance, we will continue to closely monitor developments, as the situation is changing daily."

"Of course, we will follow the direction provided by federal and provincial health authorities."

Rowing Canada's chief executive officer is also watchful with World Cup races scheduled for April and May in Italy.

"As we all know, every few days, we hear different things about where the spikes are in Europe and where the risks are," Terry Dillon said. "Like everyone, we're concerned for people's health and safety.

"Right now, we're reviewing the situation, almost on a daily basis, with a view to having to make decisions in the next few weeks about what that might mean in terms of our travel plans to Europe."

An Olympic men's baseball qualifier in Taiwan originally scheduled for April now pushed back to June has potential repercussions for the Canadian team.

The national squad will play in an eight-country Americas qualifier March 22-26 in Arizona with the winner earning an express ticket to the Tokyo Summer Olympics.

The runner-up and third-place countries in Arizona will play in the Taiwan last-chance qualifier.

This report by The Canadian Press was first published March 2, 2020.

— John Chidley-Hill and Dan Ralph contributed to this story.