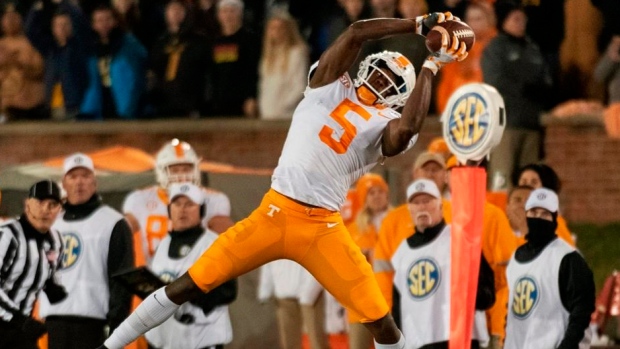 MOBILE, Ala. — Canadian-born receiver Josh Palmer is turning heads at the 2021 Senor Bowl.

The six-foot-one, 210-pound Palmer, a native of Brampton, Ont., was deemed one of the stars at practice this week.

Palmer, who played collegiately at Tennessee, is one of three Canadians at the Senior Bowl, along with Iowa offensive lineman Alaric Jackson (Windsor, Ont.) and Minnesota defensive back Benjamin St-Juste (Montreal).

"He looked smooth and fluid in one-on-ones," Daniel Jeremiah of NFL.com wrote of Palmer from Tuesday's opening workout. "He was able to get over the top of coverage and tracked the ball well.

"There wasn't a lot of buzz about him coming into the week but I thought he was really consistent."

Jeremiah added he currently has Palmer graded as a third- to fourth-round selection in the 2021 NFL draft slated for April 29-May 1.

Palmer had 33 catches for 475 yards and four TDs this season at Tennessee. Over his college career, he started 35-of-46 games and had 96 receptions for 1,459 yards and seven touchdowns.

Last week, Palmer was second behind Jackson on the CFL scouting bureau's list of the top-20 prospects for this year's draft. St-Juste was No. 11.

The Senior Bowl will be played Saturday.

This report by The Canadian Press was first published Jan. 27, 2021.