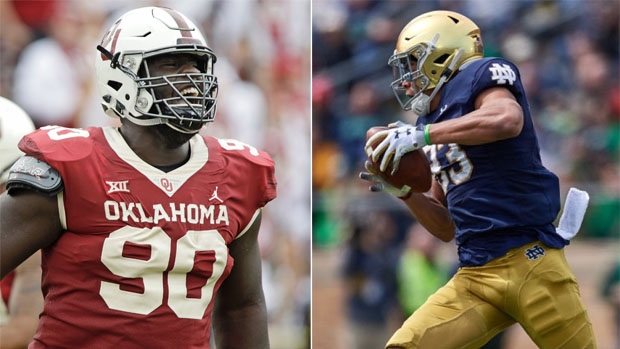 The history of Canadians selected in the NFL Draft requires a little context.

Of the 60 or so players taken since the inception of the Super Bowl era, some have been a little more Canadian than others. That is to say some were born in Canada but grew up playing in the United States or, as has become the trend among many of the country’s top young players of late, they’ve left for high school in the U.S., seeking better coaching, competition and visibility for NCAA scholarships.

Notre Dame receiver Chase Claypool and Oklahoma defensive tackle Neville Gallimore both played all their high school football in Canada, making the leap directly to big-time programs in the U.S. and ultimately onto the NFL Draft boards they are looking to climb this week in Indianapolis at the NFL Combine.

Both are college seniors who continued to develop their games through four years of NCAA football. Both have been key cogs in two of college football’s true powerhouse programs.

And they are both going to play in the NFL.

“If you had told me six or seven years ago, ‘You’re going to be at the NFL Combine competing,’ I’d have said you’re crazy,” said Gallimore. “You go from watching on your couch, praying and hoping and grinding for this moment. You never know what tomorrow holds, but right now I have an opportunity to do something special. It’s surreal.”

“It still hasn’t hit me yet. It’s like it doesn’t make sense. It’s like, how is this happening?”

Gallimore moved to St. Catharines, Ont., from Ottawa in his mid-teens to attend Canada Prep Academy, a private school that plays U.S. competition.

There Gallimore blossomed into one of the highest-rated and recruited Canadian high school players ever, having his choice among such schools as Auburn, Ohio State, Florida State and USC before landing on Oklahoma.

“It gave me to the tools to make that step,” said Gallimore about being away from home at 15 and 16. “I feel like it prepared me.

“I had a dream of playing at Oklahoma since the ninth grade. I remember, with a bunch of my friends in the summer of ninth grade, I watched ESPN all access and you’re a Canadian kid sitting on your couch on a hot summer’s day and you say to yourself, ‘How cool would it be if that was me? How cool would it be to be from Ottawa, Ontario, flying across the country to play Division I football?’ And then you fast-forward to my senior year (at Canada Football Prep) and I got that opportunity. That was a big deal.”

Gallimore is regarded as a player whose stock is on the rise, a big, physical nose tackle with outstanding athleticism for his size who can disrupt the play at or behind the line of scrimmage. He was a first-team All-Big-12 pick by the media and second team by coaches.

Going to Oklahoma seemed to not only develop his potential as a football player, it also touched his soul.

“From the moment I got to Oklahoma, I learned to call that place my home away from home,” said Gallimore, who was named a team captain last season. “Literally, when I got down there the guys you met are best friends for life down there. Just the whole experience. Having the opportunity to grind and play, and the kinds of people I met off the field. I’ve made a lot of life-long friends out of that.”

Claypool grew up a Seattle Seahawks fan in Abbotsford, B.C., playing baseball and then hockey before starting tackle football at age eight.

But for Claypool, the vision of playing major college football didn’t come into focus until late in his high school career. Eddie Ferg of the Air Raid Academy in Port Coquitlam, B.C., was training Claypool and coaching his older brother, Jacob Carvery, when he told him, ‘I can get your brother some offers. He has really good tape.’

"He kind of discovered the talent I guess you could say, and marketed me to the states,” said Claypool.

He played special teams to get on the field during his freshman season for the Fighting Irish and by last fall had blossomed into a receiver who caught 66 passes for 1,037 yards and a 15.7 yard average, adding 13 touchdowns.

“I had a lot more contested catches in my senior year which showed that I’m a good pass-catcher," Claypool said. "I think route running improved, definitely. I think I may have improved the fine details of the game, getting in and out of breaks faster. Not something I’m bad at, but something I can get better at.

“I gained a certain amount of confidence this past year and I think it showed on the field. Knowing that you’re going to be able to make the plays when it’s called to you is a good feeling.”

Claypool’s size has fuelled speculation about a possible position change to tight end, an issue that got more attention this week after he weighed in at a heavier 238 pounds to go with his 6-foot-4 frame and 80-inch wingspan. He was asked repeatedly about playing tight end this week by the media, politely embracing his potential versatility without endorsing the idea of a full-time change.

“I’ve proved that I can be versatile – go inside, outside, No. 3 receiver, flex tight end – so I think I’m one of those rare guys who can kind of lineup on all positions on the field and do well, especially because I did that in my college career. Really anywhere, really, I think I can excel.”

“I had to smile at some of the things being said [after the weigh-in] but I don’t think it’s a bad thing that people see me doing different things at the next level. I take it as a compliment.”

Claypool is a step in the direction of the position-less player emerging in the NFL, adjustable to many roles, including special teams where he expressed a desire this week to play on all four units.

He had the presence this week of a player who is here to make an impression.

“I think after this week, people will just understand I have a special combination of size and speed,” Claypool said before going out Thursday and meeting his goal of running a sub-4.5 second 40-yard time. He turned in a sparkling mark of 4.42 seconds – the fastest time for a player over 230 pounds since Detroit Lions legend Calvin Johnson in 2007.

Some draft observers believe that Gallimore can push his stock into the first round with strong performances this week. While Claypool isn’t expected to be selected that high, his performances during Senior Bowl week in January and his 40-time in Indianapolis may push him into the second round in what is considered a very deep, high-end draft for receivers.

Last year marked the first time since 2010 that there wasn’t a single Canadian selected in the NFL Draft.

But with Claypool and Gallimore sure to be playing in the NFL this coming season and Oklahoma State running back Chuba Hubbard (who also played his entire high school career in Canada) expected to join them in the fall of 2021, there are three prospects who have the potential to hit NFL heights rarely seen by Canadian players.

“It doesn’t matter where you come from,” said Gallimore. “If you love this game and you’re passionate and you have that hunger, anything is possible.”