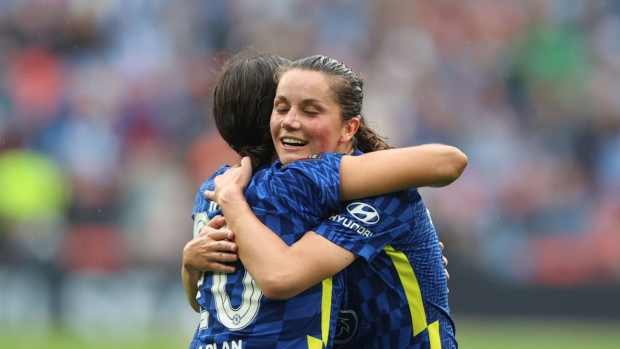 Jessie Fleming won a second trophy in two weeks, Jonathan David got back on the scoresheet and Tajon Buchanan is headed to the Champions League.

Here's a look at what Canadians did in Europe this past weekend.

Jonathan David, Lille - If Jonathan David is getting ready to say goodbye to Lille, then he's doing it in style. The Ottawa native had a brace in LOSC's penultimate fixture of the season, scoring his first league goals since January in a 3-1 victory at Nice. It was actually the home side that got on the board first and they were full value for the goal. Algeria midfielder Hicham Boudaoui's cross was hit on the volley by Netherlands forward Justin Kluivert, on loan from Roma, for the opening marker in the 31st. The match would stay 1-0 through the half. Shortly after the restart, LOSC evened things up through David. Melvin Bard attempted to pick off a long pass across the field for Timothy Weah, but missed and allowed for the United States midfielder to get a step on his man down the right. Before Bard could close him down, Weah crossed the ball in for David, who was almost right on the penalty spot, and his smart chip got in under the crossbar to make it 1-1. David's second goal, which would prove to be the winner, was much easier, but wasn't initially given. Angel Gomes's cross into a congested area was deflected by a sliding Dante off of the Nice post. The rebound popped out to Zeki Celik, whose low effort snuck between the legs of Nice 'keeper Walter Benitez and was nudged over the line by David. After protests from Nice for an offside, VAR declared it a good goal in the 61st. The two goals gave David 15 on the season. Weah would add another to give Lille a 3-1 win. What's next for David is season-ending match at home to Nantes and then, very likely, a move elsewhere. On Saturday, Fabrizio Romano reported that David's representatives had a meeting with Lille's board last week to discuss the player's potential price tag and the club is open to selling him if the price is right. Among those attached to David in recent months have been Milan, Arsenal, West Ham, Inter, Liverpool and Borussia Dortmund. Manchester United's incoming manager Erik ten Hag is also said to be an admirer of David.

Jessie Fleming, Chelsea - It was another weekend and another trophy for London, Ont.'s Jessie Fleming. After claiming the Women's Super League title last week, Fleming and Chelsea added the FA Cup to their trophy haul on Saturday with a thrilling 3-2 victory over Manchester City in extra time on a double from Australian superstar Sam Kerr. Fleming, who came on in the 80th, played a key role in the game-winning marker. The Blues got on the board first in the 33rd. After a Chelsea set piece appeared to have been successfully dealt with, Jess Carter picked up City's clearance and found Millie Bright on the right side. Bright's deep cross into the area was pinpoint accurate at the far post for Kerr to head over the line. Upon replay, it appeared that Bright's cross would have likely gone in even if Kerr hadn't met it. City would tie it before halftime and on a beautiful strike from Lauren Hemp. Chelsea got back in front in the 63rd, only minutes after Ann-Katrin Berger robbed Hemp of a second following some fine work from Chloe Kelly. After Bright and Bethany England exchanged passes, Erin Cuthbert was teed up from just outside the City area and scored on a beautifully struck ball that gave goalkeeper Karen Bardsley no chance at all. But the job wasn't done and City wasn't finished. Alex Greenwood played a ball down the right that was superbly controlled by Hayley Raso, who cut inside her defender, ran at goal and beat Berger to make it 2-2 in the 89th for the ultimate in late drama. Into extra time, Berger's long goal kick was misplayed by Alanna Kennedy allowing Kerr and Fleming to break in a 2v1. Using Fleming as a decoy, Kerr hammered home past Bardsley to give Chelsea a 3-2 lead in the 99th and what proved to be the winner. It was Chelsea's second straight FA Cup title and their fourth in eight seasons. For the 24-year-old Fleming, it's her fifth major honour with the club since joining the team in the summer of 2020.

Cyle Larin and Atiba Hutchinson, Besiktas - Besiktas and their two Canada internationals kept their hopes alive for European qualification thanks to a 2-0 win over relegated Goztepe on Sunday, but it wasn't easy. The visitors were down to 10 men in the 19th minute when Valentin Rosier was sent off for a second foul. Neither of the two yellows shown to Rosier could be unexpected. Down a man, it was Brampton, Ont.'s Cyle Larin who opened the scoring and bagged what would be the game winner in the 27th. After a foul in a dangerous area, Rachid Ghezzal's free kick was hammered into the wall, but trickled through to leave Larin unmarked and he made no mistake for his seventh league goal of the season. Five minutes later, Besiktas would wrap up the three points thanks to a goal from Josef de Souza that took advantage from some terrible marking from Goztepe. Besiktas and Canada captain Atiba Hutchinson came on to start the second half to help see the match out. What the victory means heading into the final matchday of the season is that Besiktas can still qualify for the Europa Conference League. Currently sixth in the table, Besiktas trails Alanyaspor for the final spot by three points. Both teams are even on an a +8 goal differential meaning that should Besiktas defeat Konyaspor at home and Alanyaspor falls to Fatih Karagumruk on Sunday, Besiktas will grab that place.

Tajon Buchanan, Club Brugge - While Brampton's Tajon Buchanan didn't see the pitch this past weekend, it was still a momentous occasion in his young career. With a 3-1 victory over Antwerp on Sunday, Club Brugge claimed the Belgian First Division A title for a second straight season and third time in five years. It was Club Brugge's 17th league title overall. The title means that Buchanan and Club Brugge will be playing in the Champions League next season with the winger set to become one of the select few to play in world football's top club competition.